Accretion and outflow processes are of fundamental importance for our understanding of the formation of stars and planetary systems. To trace these processes, diagnostic spectral lines such as the Brγ 2.166 μm line are widely used, although due to a lack of spatial resolution, the origin of the line emission is still unclear.

Using the VLTI/AMBER instrument, we spatially and spectrally (λ/Δλ = 1500) resolved the inner (⪉5 AU) environment of five Herbig Ae/Be stars (HD 163296, HD 104237, HD 98922, MWC 297, V921 Sco) in the Brγ emission line as well as in the adjacent continuum. From the measured wavelength-dependent visibilities, we derive the characteristic size of the continuum and Brγ line-emitting region. Additional information is provided by the closure phase, which we could measure both in the continuum wavelength regime (for four objects) as well as in the spectrally resolved Brγ emission line (for one object). The spectro-interferometric data is supplemented by archival and new VLT/ISAAC spectroscopy.

For all objects (except MWC 297), we measure an increase of visibility within the Brγ emission line, indicating that the Brγ-emitting region in these objects is more compact than the dust sublimation radius. For HD 98922, our quantitative analysis reveals that the line-emitting region is compact enough to be consistent with the magnetospheric accretion scenario. For HD 163296, HD 104237, MWC 297, and V921 Sco we identify an extended stellar wind or a disk wind as the most likely line-emitting mechanism. Since the stars in our sample cover a wide range of stellar parameters, we also search for general trends and find that the size of the Brγ-emitting region does not seem to depend on the basic stellar parameters (such as the stellar luminosity), but correlates with spectroscopic properties, in particular with the Hα line profile shape. Conclusions: By performing the first high-resolution spectro-interferometric survey on Herbig Ae/Be stars, we find evidence for at least two distinct Brγ line-formation mechanisms. Most significant, stars with a P-Cygni Hα line profile and a high mass-accretion rate seem to show particularly compact Brγ-emitting regions (RBrγ/Rcont < 0.2), while stars with a double-peaked or single-peaked Hα-line profile show a significantly more extended Brγ-emitting region (0.6 ⪉ RBrγ/Rcont ⪉ 1.4), possibly tracing a stellar wind or a disk wind. 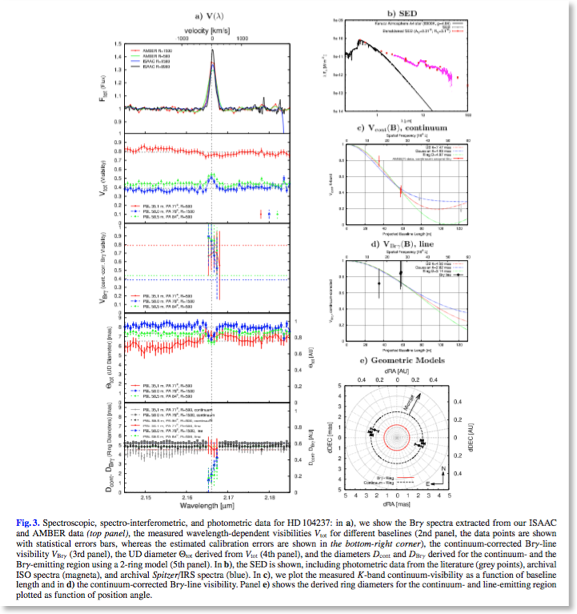 The young stellar object MWC 297 is an embedded B1.5Ve star exhibiting strong hydrogen emission lines and a strong near-infrared continuum excess. This object has been observed with the VLT interferometer equipped with the AMBER instrument during its first commissioning run. VLTI/AMBER is currently the only near infrared interferometer that can observe spectrally dispersed visibilities. MWC 297 has been spatially resolved in the continuum with a visibility of 0.50+0.08 −0.10 as well as in the Brγ emission line where the visibility decreases to 0.33 ± 0.06. This change in the visibility with wavelength can be interpreted by the presence of an optically thick disk responsible for the visibility in the continuum and of a stellar wind traced by the Brγ emission line and whose apparent size is 40% larger. We validate this interpretation by building a model of the stellar environment that combines a geometrically thin, optically thick accretion disk model consisting of gas and dust, and a latitude-dependent stellar wind outflowing above the disk surface. The continuum emission and visibilities obtained from this model are fully consistent with the interferometric AMBER data. They agree also with existing optical, near-infrared spectra and other broad-band near-infrared interferometric visibilities. We also reproduce the shape of the visibilities in the Brγ line as well as the profile of this line obtained at an higher spectral resolution with the VLT/ISAAC spectrograph, and those of the Hα and Hβ lines.

The disk and wind models yield a consistent inclination of the system of approximately 20° . A picture emerges in which MWC 297 is surrounded by an equatorial flat disk that is possibly still accreting and an outflowing wind that has a much higher velocity in the polar region than at the equator. The VLTI/AMBER unique capability of measuring spectral visibilities therefore allows us for the first time to compare the apparent geometry of a wind with the disk structure in a young stellar system. The paper was published in A&A, 464, 43. 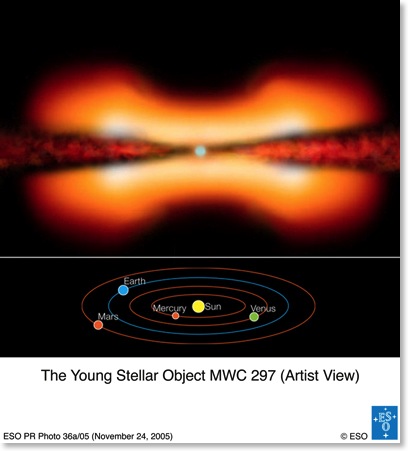 An announcement was also made by the French "Institut National des Sciences de l'Univers" (INSU) an can be found HERE (in French, sorry). 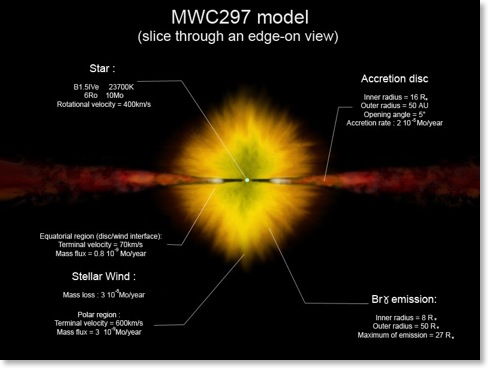 This is another nice picture from Anthony Meilland: why trying to build models since we already have nice pictures !