Interferometry has been intensively done at long wavelengths, starting with the radio interferometers in the years 50th since it was easier to guide radio wavelengths in cable while keeping the phase information or using a local oscillator and a correlator to recombine "a posteriori" the beams over intercontinental distances. In the optical domain a lot of work has been done at IR and near-IR wavelengths since it was technically easier or we must say, less difficult to recombine directly the optical beams since the coherence length is larger and the turbulence slower than at shorter wavelengths. Therefore, the visible domain of the electromagnetic spectrum is not covered at the same level than near or mid infrared. Some very nice and important results have been however obtained with the GI2T interferometer in south of France, the Mark III interferometer on the Mount Wilson, USA, the NPOI array in Flagstaff, USA or the SUSI interferometer in Australia. In the international competition and with the decommissioning of interferometers like GI2T or IOTA, the era of pioneers is now close and we can see the great development of worldwide facilities like VLTI, KECK-I or CHARA. The visible domain is however one of the main goal of the future development of optical interferometry with respect to the unique astrophysical capabilities but is not foreseen for the VLTI 2nd generation. VEGA will clearly have the leadership in this context but it will also be scientifically fully complementary of our great investment in the VLTI facility (scientific exploitation, software development, 2nd generation instruments). 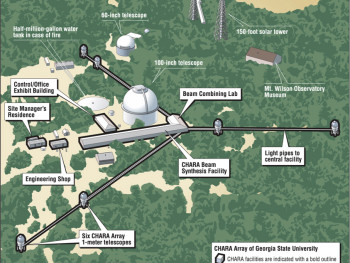 Chara layout CHARA is an interferometric facility operated by the Georgia State University in Atlanta and is located at Mt Wilson in California. It is equipped with 6 telescopes of 1m in diameter and arranged on a Y-shape array with baselines ranging from 30 to 330 meters. CHARA has been developed by the Georgia State University and is not an open facility. The initial group has grown through selected collaborations with teams involved in interferometric developments. It is now a collaboration between different groups, mainly the Observatoire de Meudon through the FLUOR instrument, the University of Michigan through the MIRC project, the Michelson Science CenterUS interferometric excellence centre) and some peoples from the SUSI group in Australia. During the definition of the array, CHARA was foreseen to operate in the visible domain but the first instruments are operating in the near-IR domain. VEGA will finally realize CHARA’s visible goals and propel this unique facility at the level of the interferometer with the world’s largest spectral & spatial resolution. Preliminary contacts have been taken in April and September 2005. Then a small group of OCA has visited the CHARA array in November 2005 and finally we have been invited at the annual CHARA collaboration meeting, which has been held in Tucson from February 20th to 23th. During the meeting, we have had the possibility to present and discuss our proposition and just recently we have obtained a formal agreement from CHARA, considering that VEGA will be the visible instrument of the array. This agreement is currently being written in a Memorandum of Understanding between OCA and CHARA and we plan together the first light for summer 2007. The CHARA staff is greatly involved in the VEGA design and integration and it is for us a guaranty of success. On both sides the work has already started.

DURING THE OBSERVATIONS (see the CHARA-WIKI)