Symmetric part of the internal solar rotation rate with respect to the equator. Iso-contours are shown every 10 nHz from 300 nHz up to 480 nHz. This was obtained by inverting the frequency splittings estimated from PICARD/SODISM intensity images over the period from April 16 to November 10 2011. The solution below 0.3 solar radius is poorly constrained by the data and is not shown. 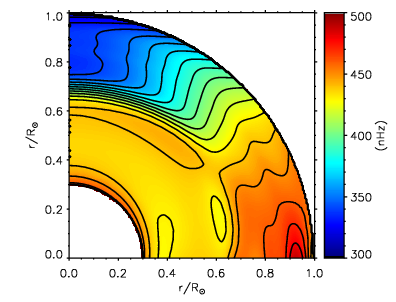 This figure is showing the evolution over time of the residuals of the solar rotation rate. A running mean over 10 years have been substracted to the rotation rate inferred from SOHO/MDI and SDO/HMI f-modes splitting. For the 5 first and last years, the mean over the first and last 10 years are used as reference. The average depth is 0.99 Solar Radius or about 7 Mm below the photosphere. The top panel is showing flow speed in meter per second while the bottom panel shows rotation rate in nHz (Adapted from Corbard & Thompson, 2002, Solar Phys, 205, 211). Data are provided by Jesper Schou and the SDO/HMI Team.