Simulations of collisions between asteroids

Simulations of collisions between asteroids: images and movies, reprints 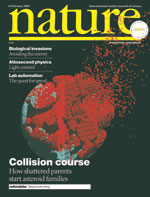 Image from one of our simulations (cover of Nature, February 2003)

Image from one of our simulations (cover of Science, November 2001
The disruption of an asteroid involves a small projectile which collides with a bigger asteroid (called hereafter the target) at a typical velocity of 5 km/s. The disruption of the target is then divided in two phases: 1- a fragmentation phase during which the shock wave generated by the impact propagates into the body and opens fracture zones which will procude fragments; 2- a gravitational phase during which these hundreds of thousands of fragments interact gravitationnally. As a result of their mutual attraction these fragments can reaccumulate and finally form a full size distribution of more or less large bodies, mainly consisting in aggregates of reaccumulated smaller fragments. Such process is at the origin of the formation of asteroid families (Michel et al. 2001, Science Vol. 294, 1696-1700). Moreover, the internal structures of the family parent bodies already contained fractures and voids before these bodies were disrupted to form a family (

At the beginning of each of the following movies, the target has already been totally pulverized by the fragmentation phase into fragments of sizes of the order of 1 kilometer. The movies show the gravitational phase during which these fragments can interact and one can see the reaccumuation occuring and resulting in the formation of larger bodies and satellites. This process takes in real several hours to a few days (but months of computation time!!). Simulations were made with a parallel program on quadri-processors Compaq Dec Alpha (SIVAM project and Ilga team of OCA) and on a Beowulf installed by the Society Alineos. Our numerical program (called pkdgrav) is able to calculate the gravitational interaction between hundreds of thousands of fragments. Technically, it is based on the so-called "hierarchical tree method" which allows to reduce the CPU time from O(NxN) to O(NlogN) where N is the number of particles, and collisions/reaccumulations of fragments are also handled with different possible options. Simulations of the full process require typically a month of computation time on a quadri-processors (1.2 GHz/processor). 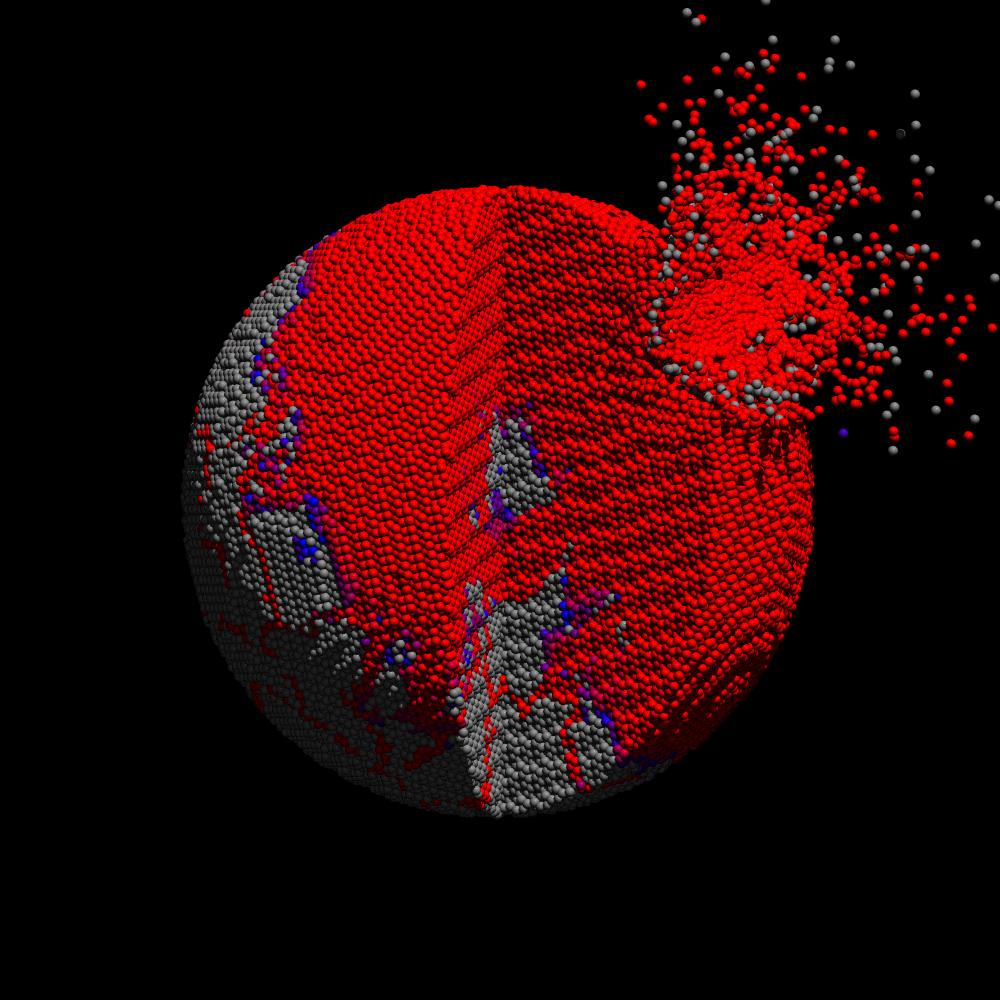 Image from one of our simulation of fragmentation of a 25 km asteroid with an internal structure initially composed of fractures (blue zones). The red zones corresponds to damaged zones due to the impact of a projectile. The impact point is located where particles are already ejected. Different internal structures of the asteroid parent body result in different collional outcome properties (size and velocity distributions of fragments). Therefore, to determine the impact energy required to obtain a given collisional result, it is fundamental to have some knowledge on the internal structure of the target.

Movies of  the gravitational phase of an asteroid disruption

1. Disruption of a 100 km asteroid: after reaccumulation the largest fragment will contain 50% of the mass of the parent body and a big satellite will be formed around it.

2. Disruption of a 164 km asteroid representing the so-called Flora family formation: after reaccumulation, the largest fragment will contain 56% of the mass of the parent body and one can see other large fragments be formed and the presecne of satellites.

3. Disruption of a 119 km asteroid representing the so-called Koronis formation: after reaccumulation, the largest fragment will contain 4% of the mass of the parent body. This is a highly catastrophic event, so that it takes several days since fragments perform long (and interesting) trajectories before reaccumulating.

Images of fragments during reaccumulation 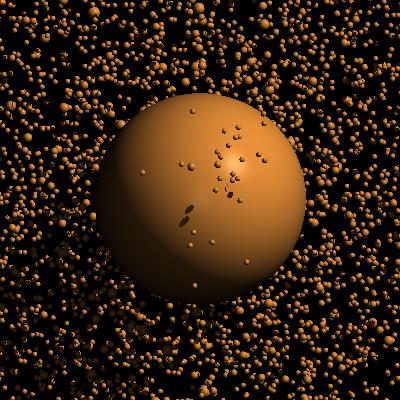 Exemple of re-accumulation: the largest fragment contains 70% of the mass of the 284 km parent body (Eunomia family parent body), 84 minutes after the impact of a projectile.

Each of the following image is taken during the re-accumulation phase, 84 minutes after the impact of the projectile with the target.

1. Re-accumulation of the largest fragment of a 284 km asteroid (Eunomia family parent body) which will finally contain 70% of its mass.

2. Re-accumulation of the largest fragment of a 164 km asteroid (Flora family parent body) which will finally contain 56% of its mass.

3. Re-accumulation of the largest fragment of a 119 km asteroid (Koronis family parent body) which will finally contain 4% of its mass.