Betelgeuse was observed in the wavelength range between 2.28 and 2.31 µm with VLTI/AMBER using baselines of 16, 32, and 48 m. The spectral resolutions of 4800–12000 allow us to study inhomogeneities seen in the individual CO ﬁrst overtone lines.

Spectrally dispersed interferograms have been successfully obtained in the second, third, and ﬁfth lobes, which represents the highest spatial resolution (9 mas) achieved for Betelgeuse. This corresponds to ﬁve resolution elements over its stellar disk. The AMBER visibilities and closure phases in the K-band continuum reveal that Betelgeuse shows no drastic deviations from a uniform disk with a diameter of 43.05 ± 0.02 mas at the time of the observations. Comparison of these AMBER data with the previous K-band interferometric data taken at various epochs suggests that Betelgeuse seen in the K-band continuum shows remarkably smaller deviations from a uniform disk than predicted by recent 3-D convection simulations for red supergiants. On the other hand, our AMBER data in the CO lines reveal salient inhomogeneous structures. The visibilities and phases (closure phases as well as diﬀerential phases representing asymmetry in lines with respect to the continuum) measured within the CO lines show that the blue and red wings originate in spatially distinct regions over the stellar disk, indicating an inhomogeneous velocity ﬁeld which makes the star appear diﬀerent in the blue and red wings. Our AMBER data in the CO lines can be roughly explained by a simple model, in which a patch of CO gas is moving outward or inward with velocities of 10–15 km s−1 , while the CO gas in the remaining region in the atmosphere is moving in the opposite direction with the same velocities. Also, the AMBER data are consistent with the presence of the MOLsphere extending to ∼1.4–1.5 R⋆ with a CO column density of ∼ 1 × 1020 cm−2 .

Our AMBER observations of Betelgeuse are the ﬁrst spatially resolved study of the so-called macroturbulence in a stellar atmosphere (photosphere and possibly MOLsphere as well) other than the Sun. The spatially resolved CO gas motion is likely to be related to convective motion or intermittent mass ejections in clumps or arcs. 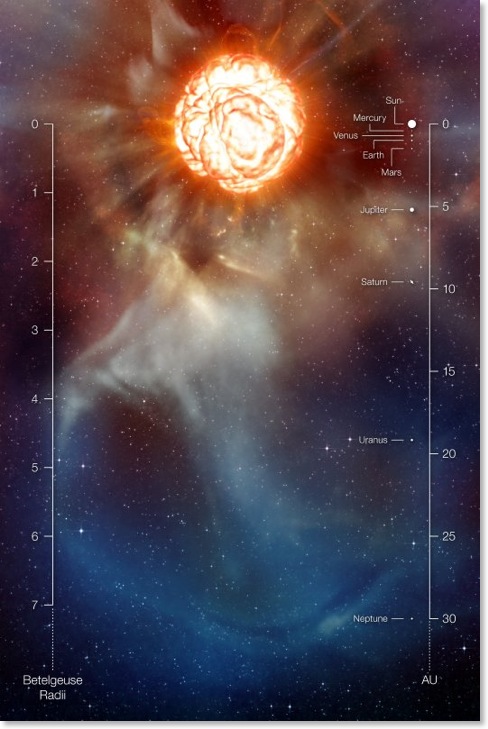 An ESO press released can be found HERE


We present one-dimensional aperture synthesis imaging of the red supergiant Betelgeuse (α Ori) with VLTI/AMBER. We reconstructed for the first time one-dimensional images in the individual CO first overtone lines. Our aim is to probe the dynamics of the inhomogeneous atmosphere and its time variation.

The reconstructed one-dimensional projection images reveal that the star appears differently in the blue wing, line center, and red wing of the individual CO lines. The one-dimensional projection images in the blue wing and line center show a pronounced, asymmetrically extended component up to ∼1.3 R⋆, while those in the red wing do not show such a component. The observed one- dimensional projection images in the lines can be reasonably explained by a model in which the CO gas within a region more than half as large as the stellar size is moving slightly outward with 0–5 km s−1, while the gas in the remaining region is infalling fast with 20–30 km s−1. A comparison between the CO line AMBER data taken in 2008 and 2009 shows a significant time variation in the dynamics of the CO line-forming region in the photosphere and the outer atmosphere. In contrast to the line data, the reconstructed one-dimensional projection images in the continuum show only a slight deviation from a uniform disk or limb-darkened disk. We derive a uniform-disk diameter of 42.05 ± 0.05 mas and a power-law-type limb-darkened disk diameter of 42.49 ± 0.06 mas and a limb-darkening parameter of (9.7 ± 0.5) × 10−2. This latter angular diameter leads to an effective temperature of 3690 ± 54 K for the continuum-forming layer. These diameters confirm that the near-IR size of Betelgeuse was nearly constant over the last 18 years, in marked contrast to the recently reported noticeable decrease in the mid-IR size. The continuum data taken in 2008 and 2009 reveal no or only marginal time variations, much smaller than the maximum variation predicted by the current three-dimensional convection simulations.

Our two-epoch AMBER observations show that the outer atmosphere extending to ∼1.3–1.4 R⋆ is asymmetric and its dynamics is dominated by vigorous, inhomogeneous large-scale motions, whose overall nature changes drastically within one year. This is likely linked to the wind-driving mechanism in red supergiants. 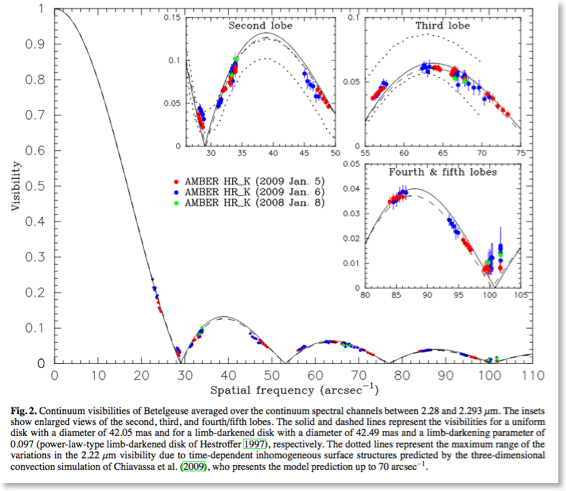 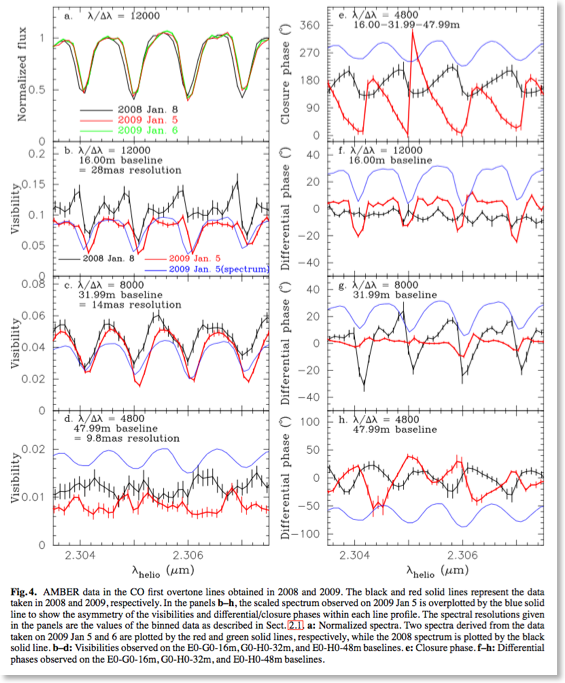 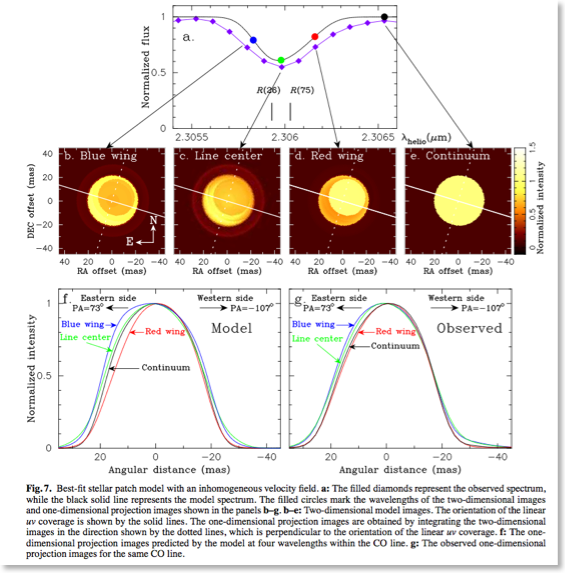 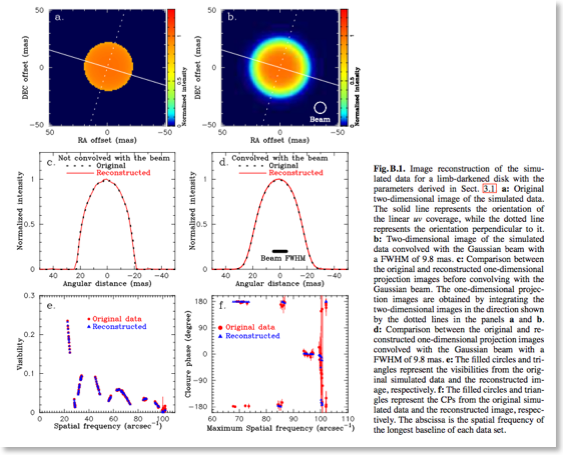 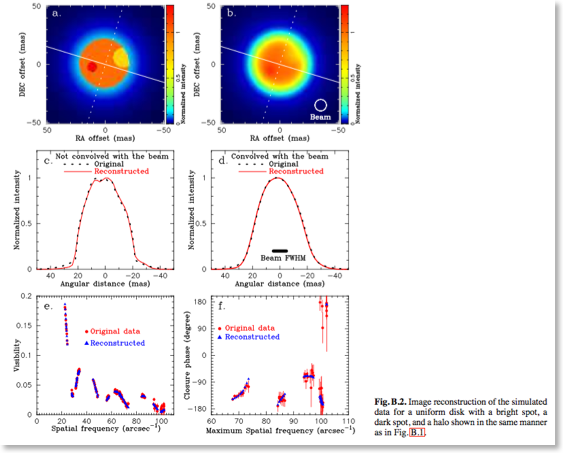