The star HD 87643, exhibiting the “B[e] phenomenon”, has one of the most extreme infrared excesses for this object class. It harbours a large amount of both hot and cold dust, and is surrounded by an extended reﬂection nebula.

One of our major goals was to investigate the presence of a companion in HD87643. In addition, the presence of close dusty material was tested through a combination of multi-wavelength high spatial resolution observations.

We report the direct detection of a companion to HD 87643 by means of image synthesis using the AMBER/VLTI instrument. The presence of the companion is confirmed by the MIDI and NACO data, although with a lower conﬁdence. The companion is separated by ∼ 34 mas with a roughly north-south orientation. The period must be large (several tens of years) and hence the orbital parameters are not determined yet. Binarity with high eccentricity might be the key to interpreting the extreme characteristics of this system, namely a dusty circumstellar envelope around the primary, a compact dust nebulosity around the binary system and a complex extended nebula witnessing past violent ejections. 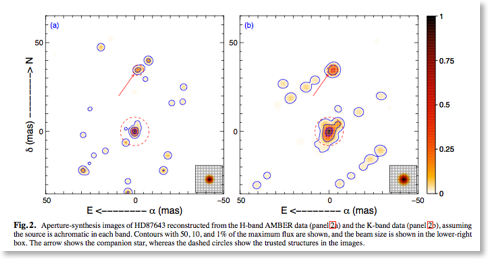 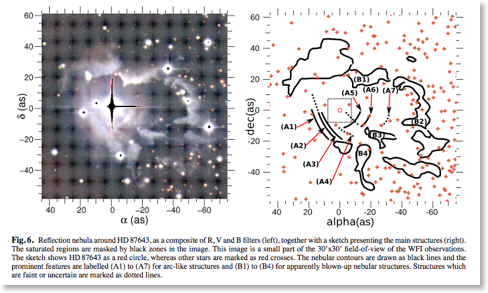