We have studied the Be star δ Cen circumstellar disk using long-baseline interferometry which is the only observing technique capable of resolving spatially and spectroscopically objects smaller than 5 mas in the H and K band.

We have detected an oscillation in the visibility curve plotted as a function of the spatial frequency which is a clear signature of a companion around δ Cen. Our best-ﬁt soltution infers a binary separation of 68.7 mas, a companion ﬂux contribution in the K band of about 7% of the total ﬂux, a PA of 117.5◦ , and an envelope ﬂux around the Be primary that contributes up to about 50% of the total ﬂux, in agreement with our Spectral Energy Distribution (SED) ﬁt. The envelope size is estimated to be 1.6 mas in K but no departure from spherical symmetry is detected. 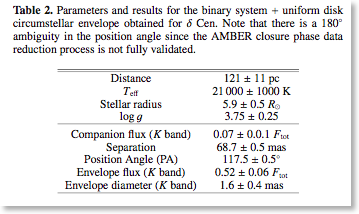