IRC +10420 is a massive evolved star belonging to the group of yellow hypergiants. Currently, this star is rapidly evolving through the Hertzprung-Russell diagram, crossing the so-called yellow void. IRC +10420 is suﬀering from intensive mass loss which led to the formation of an extended dust shell. Moreover, the dense stellar wind of IRC +10420 is subject to strong line emission.

Our goal was to probe the photosphere and the innermost circumstellar environment of IRC +10420, to measure the size of its continuum- as well as the Brγ line-emitting region on milliarcsecond scales, and to search for evidence of an asymmetric distribution of IRC +10420’s dense, circumstellar gas.

We have obtained near-infrared long-baseline interferometry of IRC +10420 with the AMBER instrument of ESO’s Very Large Telescope Interferometer (VLTI). The measurements were carried out in May/June 2007 and May 2008 in low-spectral resolution mode in the J H K bands using three Auxillary Telescopes (ATs) at projected baselines ranging from 30 to 96 m, and in October 2008 in high-spectral resolution mode in the K band around the Brγ emission line using three Unit Telescopes (UTs) with projected baselines between 54 and 129 m. The high-spectral resolution mode observations were analyzed by means of radiative transfer modeling using CMFGEN and the 2-D Busche & Hillier codes.

For the ﬁrst time, we have been able to absolutely calibrate the H- and K-band data and, thus, to determine the angular size of IRC+10420’s continuum- and Brγ line-emitting regions. We found that both the low resolution diﬀerential and closure phases are zero within the uncertainty limits across all three bands. In the high-spectral resolution observations, the visibilities show a noticeable drop across the Brγ line on all three baselines. We found diﬀerential phases up to -25◦ in the redshifted part of the Brγ line and a non-zero closure phase close to the line center. The calibrated visibilities were corrected for AMBER’s limited ﬁeld-of-view to appropriately account for the ﬂux contribution of IRC +10420’s extended dust shell. From our low-spectral resolution AMBER data we derived FWHM Gaussian sizes of 1.05 ± 0.07 and 0.98 ± 0.10 mas for IRC +10420’s continuum-emitting region in the H and K bands, respectively. From the high-spectral resolution data, we obtained a FWHM Gaussian size of 1.014 ± 0.010 mas in the K-band continuum. The Brγ -emitting region can be ﬁtted with a geometric ring model with a diameter of 4.18+0.19 −0.09 mas, which is approximately 4 times the stellar size. The geometric model also provides some evidence that the Brγ line-emitting region is elongated towards a position angle of 36◦ , well aligned with the symmetry axis of the outer reﬂection nebula. Assuming an unclumped wind and a luminosity of 6 × 105 L⊙ , the spherical radiative transfer modeling with CMGFEN yields a current mass-loss rate of 1.5 − 2.0 × 10−5 M⊙ yr−1 based on the Brγ equivalent width. However, the spherical CMFGEN model poorly reproduces the observed line shape, blueshift, and extension, deﬁnitively showing that the IRC +10420 outﬂow is asymmetric. Our 2-D radiative transfer modeling shows that the blueshifted Brγ emission and the shape of the visibility across the emission line can be explained with an asymmetric bipolar outﬂow with a high density contrast from pole to equator (8–16), where the redshifted light is substantially diminished. 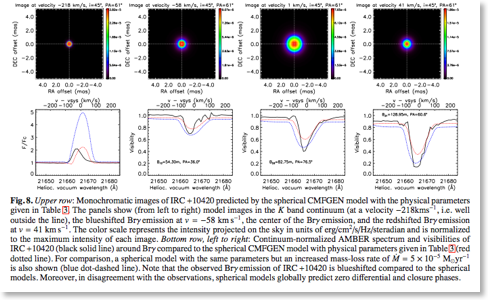