Five different physical processes might be responsible for the formation of decretion disks around Be stars: fast rotation of the star, stellar pulsations, binarity, stellar winds, and magnetic fields. Our observations indicate that fast rotation seems to produce a disk in Keplerian rotation, at least in the specific case of the two stars observed. We do not know if this observational result is a generality or not.

We measure the size, orientation, shape, and kinematics of the disks around 2 Be stars, namely 48 Per and ψ Per.

We used the VEGA/CHARA interferometer with a spectral resolution of 5000 to obtain spectrally dispersed visibility modulus and phases within the Hα emission line.

We were able to estimate the disk extension in the continuum and in the Hα line, as well as flattening, for both stars. Both stars rotate at nearly a critical rotation, but while the disk of 48 Per seems to be in Keplerian rotation, our preliminary data suggest that the disk of ψ Per is possibly faster than Keplerian, similarly to what has been found for κ CMa with observations carried out in the near-IR. However, more data is needed to confirm the fast rotation of the disk.

Assuming a simple uniform disk model for the stellar photosphere in the continuum and a Gaussian brightness distribution in the line emission region, we obtain a ratio of the disk diameter over the photospheric diameter of 8 for 48 Per and 11 for and ψ Per. We also found that the major axis of 48 Per is parallel to the polarization angle and not perpendicular to it as previously observed for many Be stars, including ψ Per. This might be due to the optical thickness of the disk, which is also responsible for the incoherent scattering of a non negligible part of the Hα line emission. To our knowledge, this is the first time that this effect has been measured in a Be star. 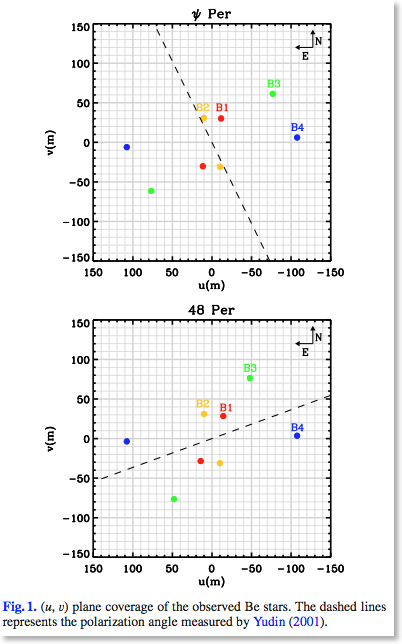 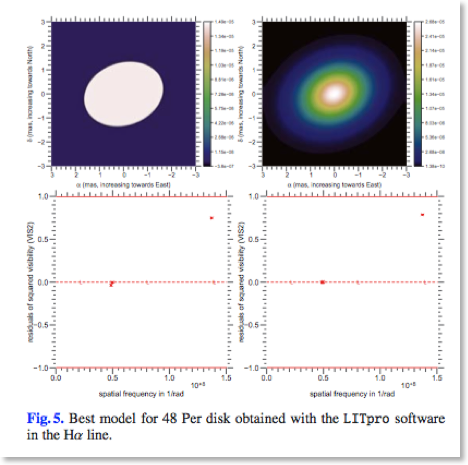 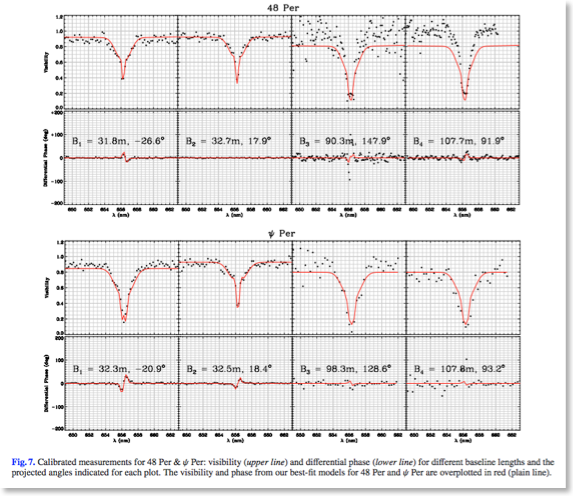