γ Cas is the prototypical classical Be star and is recently best known for its variable hard X-ray emission. To elucidate the reasons for this emission, we mounted a multiwavelength campaign in 2010 centered around four XMM-Newton observations. The observational techniques included long baseline optical interferometry (LBOI) from two instruments at CHARA, photometry carried out by an Automated Photometric Telescope and Hα observations. Because γ Cas is also known to be in a binary, we measured radial velocities from the Hα line and redetermined its period as 203.55±0.20 days and its eccentricity as near zero. The LBOI observations suggest that the star’s decretion disk was axisymmetric in 2010, has an system inclination angle near 45◦, and a larger radius than previously reported. In addition, the Be star began an “outburst” at the beginning of our campaign, made visible by a brightening and reddening of the disk during our campaign and beyond. Our analyses of the new high resolution spectra disclosed many attributes also found from spectra obtained in 2001 (Chandra) and 2004 (XMM-Newton). As well as a dominant hot (≈ 14keV) thermal component, the familiar ones included: (i) a fluorescent feature of Fe K even stronger than observed at previous times, (ii) strong lines of NVII and NeXI lines indicative of overabundances, and (iii) a subsolar Fe abundance from K- shell lines but a solar abundance from L-shell ions. We also found that two absorption columns are required to fit the continuum. While the first one maintained its historical average of 1×1021 cm−2, the second was very large and doubled to 7.4×1023 cm−2 during our X-ray observations. Although we found no clear relation between this column density and orbital phase, it correlates well with the disk brightening and reddening both in the 2010 and earlier observations. Thus, the inference from this study is that much (perhaps all?) of the X-ray emission from this source originates behind matter ejected by γ Cas into our line of sight. 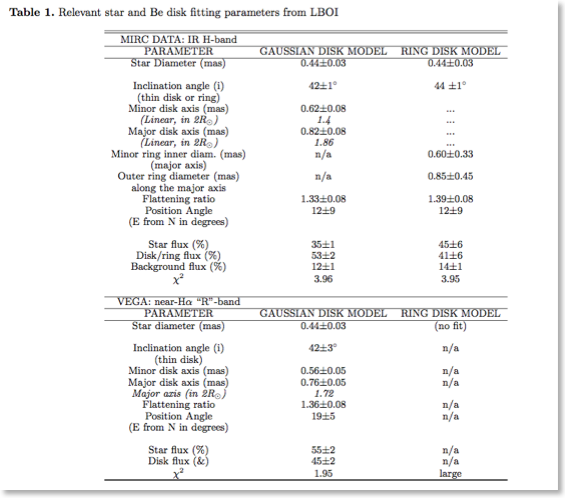 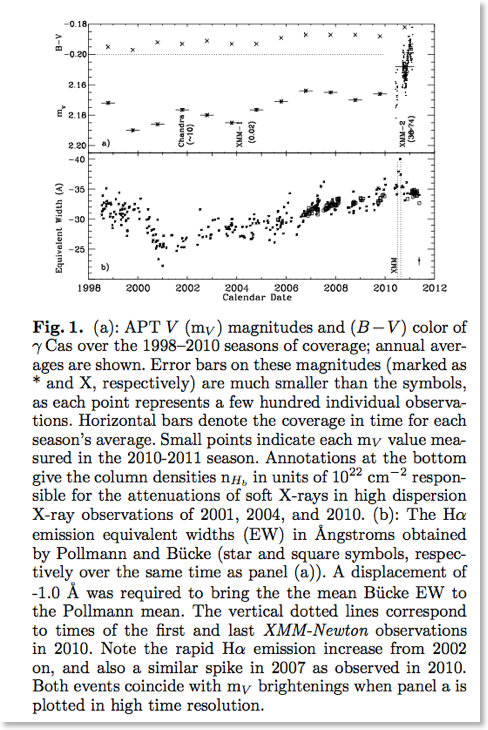 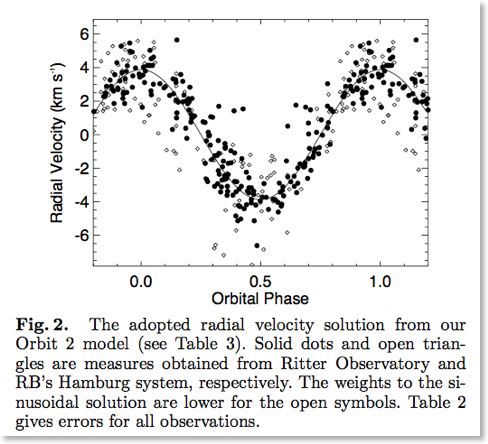 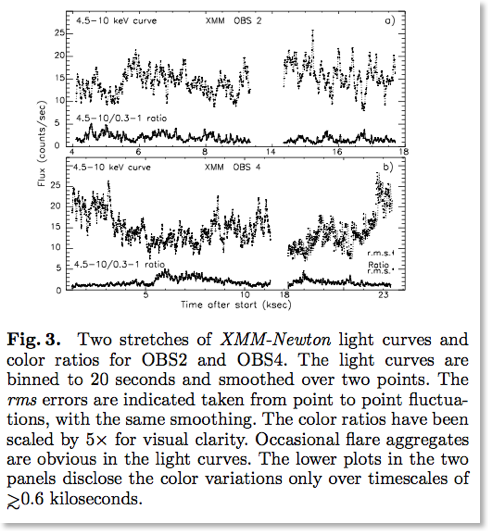 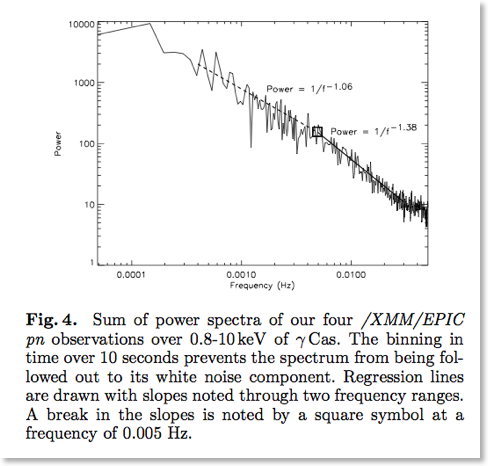 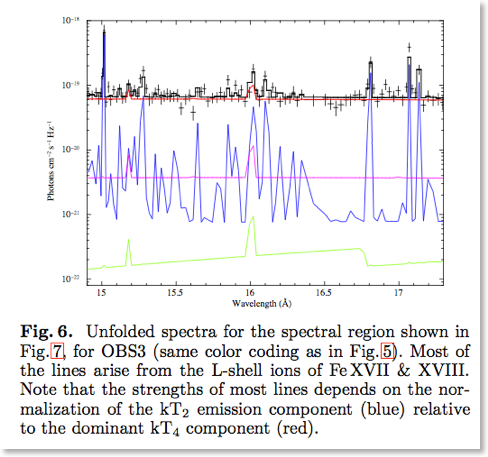 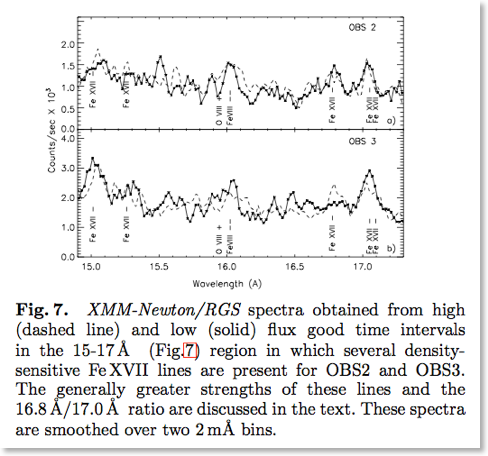 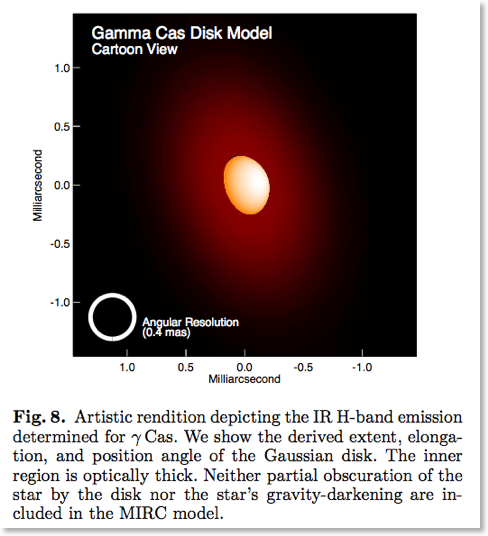 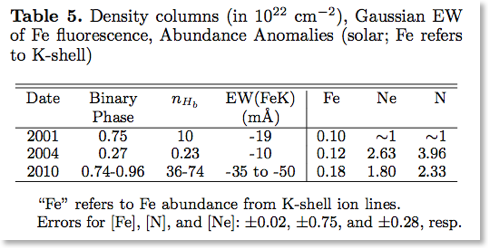 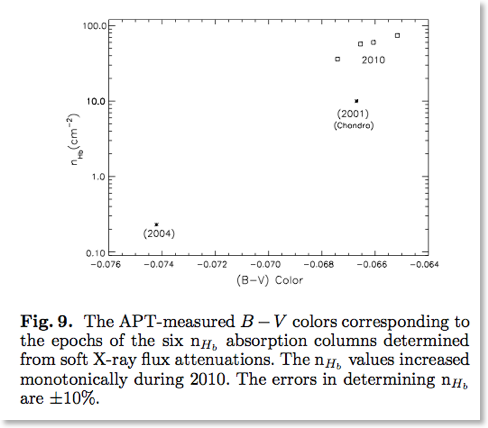 The relationship between γ Cassiopeiae’s X-ray emission and its circumstellar environment
Part II: Geometry and kinematics of the disk from MIRC and VEGA instruments on the CHARA Array

γ Cas is thought to be the prototype of classical Be stars and is the most studied object among this group. However, as for all Be stars, the origin and the physics of its circumstellar disk responsible for the observed near IR- excess, emission lines, and peculiar X-ray emission is still being debated.

We constrain the geometry and kinematics of its circumstellar disk from the highest spatial resolution ever achieved on this star. This investigation is a part of a large multi-technique observing campaign to obtain the most complete picture of γ Cas which emphasizes the relation of the circumstellar environment to the star’s X-ray flux.

Here we present new observations in the near infrared (MIRC) and in the visible (VEGA) obtained with the CHARA interferometer. The VEGA instrument allows us to not only obtain a global disk geometry but also spectrally dispersed visibility modulus and phases within the Hα emission line, which enables us to study the kinematics within γ Cas’s disk.

We obtain a disk extension in the nearby Hα continuum of 1.72 stellar diameter and 1.86 stellar diameter in the H band at 1.65 μm assuming a Gaussian disk model but also compatible with an elliptical ring model with a minor internal diameter of 1.38 stellar diameter in H. For the first time we demonstrate that the rotation mapped by the emission in the Hα line within the disk of γ Cas and up to 10 R⋆ is Keplerian.

These observations have pushed the size of the disk to greater proportions. γ Cas was also confirmed to be a nearly critical rotator. The disk imaging gives neither indication of a 1-arm spiral feature nor evidence of a secondary star reinforcing the interpretation that the secondary is certainly a low-mass and low-luminosity star or a degenerate companion. 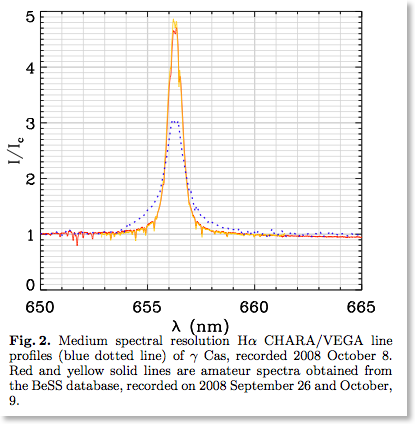 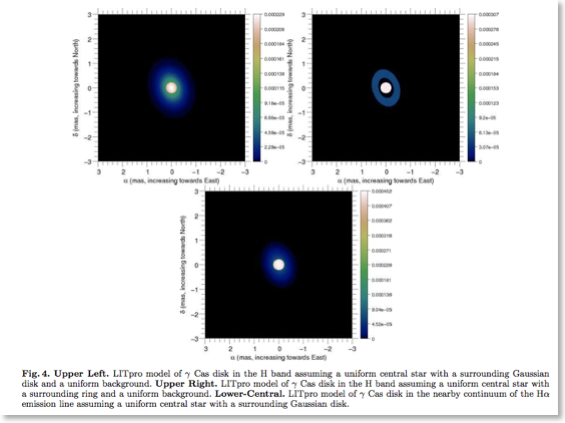 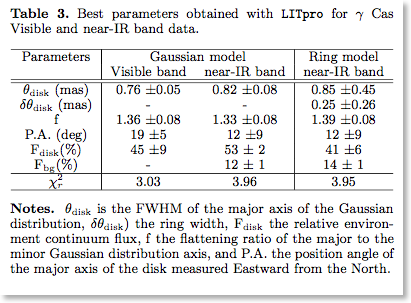 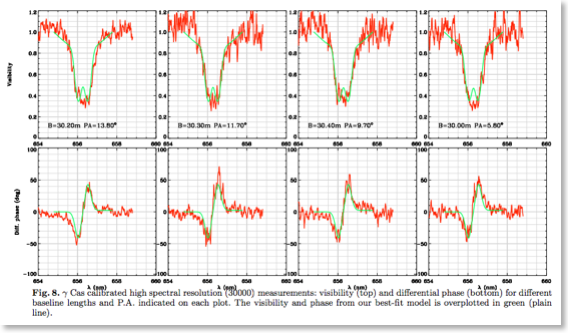 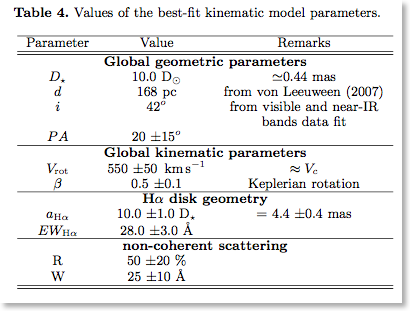