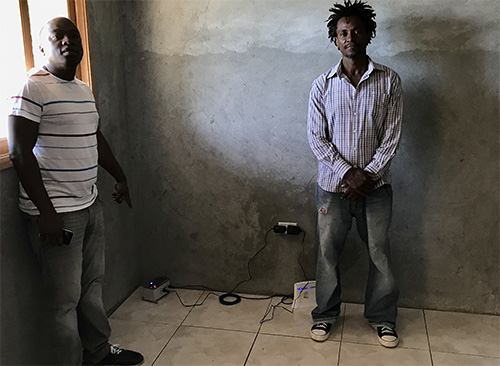 We hypothesize that disseminating knowledge while placing citizens or communities at the heart of scientific information production and usage can improve earthquake awareness and promote protection initiatives. OSMOSE will test this hypothesis through an interdisciplinary participatory seismology experiment in Haiti, a country which was the scene of a major seismic disaster on January 12, 2010.

OSMOSE builds on the S2RHAI pilot project (CNRS/IRD, 2019-2021), which used low-cost and low-maintenance seismological stations to test whether public involvement could improve earthquake awareness while producing data useful to seismologists. We showed that (1) these seismometers are an excellent complement to a conventional seismic network, (2) a demand for earthquake information exists as well as a pride of being part of a broad scientific experiment, and (3) one can use these low-cost instruments to establish a dialog with citizens. However, much work remains to be done on the incentives and barriers that make such community-based monitoring and information system efficient and sustainable

OSMOSE’s general objective is to determine the conditions that allow for the development and sustained support of an earthquake information system that empowers stakeholders by associating them to the information chain. In fine, the monitoring network is no longer just a set of seismometers but becomes a network of multiple stakeholders who revolve around these sensors and the information they provide.

OSMOSE’s specific objectives are to (1) produce scientifically validated seismological information with low-cost sensor involving citizens and the civil society, (2) understand perceptions, representations, and needs in relation with the earthquake problem within the local socio-cultural context, (3) define a solution for the production and dissemination of information that is relevant all stakeholders, and (4) promote local ownership and sustainability of this multi-stakeholder information system.

OSMOSE will achieve these goals through four interconnected work packages that will (1) improve real-time earthquake information based on citizen seismometers, (2) use a socio-anthropological approach to analyze the perceptions, needs, and motivations of seismometers’ hosts and other stakeholders, (3) co-define with hosts and citizens an earthquake information system adapted to their needs, and (4) communicate and educate based on the findings of previous work packages.

At the intersection of seismological and social sciences, OSMOSE will advance current research on citizen sciences that aim to strengthen the link between environment and society, and between fundamental knowledge and operational action.

OSMOSE builds on (1) a long-term collaboration between French and Haitian partners, (2) the lessons learned from the S2RHAI project, (3) a multidisciplinary group already working together within SRHAI, and (4) an intimate knowledge of the local context and field conditions.