A study poses a new constraint on the mass of "graviton"

Scientists from the observatories of Paris and Côte d’Azur, as well as the scientific center of Monaco, have used solar system data in order to constrain the mass of the graviton*.

The existence of this finite range would, for instance, lead to modifications of the speed of gravitational waves depending on their frequencies. This way, by studying the spectra of gravitational wave from the merger of binary black holes, the LIGO-Virgo collaboration have already constrained the mass of the graviton to be less than 5.0 X 10-23, corresponding to a Compton wavelength greater than 2.6 X 1013 kilometers. 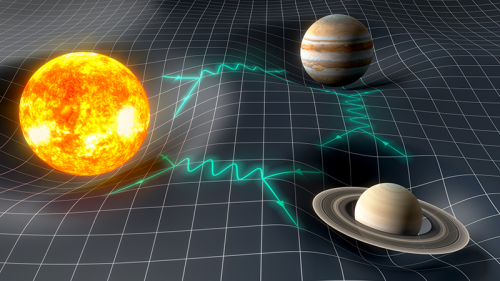 They used the planetary ephemeris INPOP (acronym for numerical integrator of the Paris observatory), developed at the Paris and Côte d’Azur observatories, in order to fit the planetary model in the massive gravity framework with the current most precise observations of the solar system. This way, they were able to constraint the Compton wavelength associated to the gravitational field to be greater than1.83 X 1013 km – corresponding to more than 120 000 times the Earth-Sun distance – which translates as a mass smaller than 6.76 X 10-23 eV/c2 – or about 10-55 grams.

Although the constraints from the LIGO-Virgo collaboration and the new one have roughly the same magnitudes, one should keep in mind that it is pure coincidence. Indeed, the two studies focus on different aspects of the massive gravity phenomenology (radiative versus orbital), and use totally different observations (gravitational waves versus astrometry in the solar system).

Constraining the mass of the graviton with the planetary ephemeris INPOP, Physical Review Letters,

* It is a convenient misnomer to talk about a “graviton” – which is an hypothetical particle associated to an hypothetical quantum gravity. It takes its root from the wave-particle duality that is manifest in fundamental physics. In fact, the notion of “mass” for a field is independent of whether or not the field has a quantum associated to it. They are, however, many different ways to define a mass for a gravitational field. The authors focused on a specific definition that links a finite range of gravity to a mass.