The two on-going sample return space missions, Hayabusa2 and OSIRIS-REx, have returned invaluable information for the nature of the surfaces of their target near-Earth asteroids, Ryugu and Bennu. These primitive, dark, carbonaceous asteroids appear to be at least covered by extremely weak material. Asteroids send free samples to Earth that we collect as meteorites, however such weak materials cannot survive the passage from Earth’s atmosphere. In the light of these new space mission data, it appears that we miss asteroid material from our meteoritic collection. Which are the properties of these materials?

The novelty behind this work, led by Observatoire de la Côte d'Azur researchers C. Avdellidou and M. Delbo, is that for a first time the surfaces of carbonaceous asteroids are closely reproduced, as up to now researchers were using material proxies that were mostly irrelevant to the natural ones. The international team that includes researchers from the University of Grenoble, University of Central Florida and University of Kent, fabricated in the laboratory a mineralogically analogue material to the CM carbonaceous meteorites (so far the closest mineralogical composition to Bennu and Ryugu) but with mechanical and thermal properties intermediate between those of the CM meteorites, that we receive on Earth, and those measured for the boulders on Ryugu and Bennu.

There are two main processes that act on the surfaces of asteroids leading to the breakup of their surface rocks and produce regolith: impacts by meteoroid bombardment and thermal cracking due to day and night temperature cycles. How do these processes act on weak carbonaceous surfaces? How similar or different is the produced regolith?

The team, using the 2-stage light-gas gun of the University of Kent, performed a series of hypervelocity impact experiments to study how these simulant materials fragment, simulating their response of asteroid surfaces to collisions of micrometeoroids in the main asteroid belt. Morphologically, the surface resulting from the impacts on the simulants present a degree of roughness that qualitatively and quantitatively resembles those observed by MASCOT, the lander of Hayabusa2, on the boulders of Ryugu. Moreover the resulted craters are extremely similar to the ones - of similar scale - that are observed on asteroid Bennu. The produced regolith due to impact process will allow predictions for the sample that will be returned. 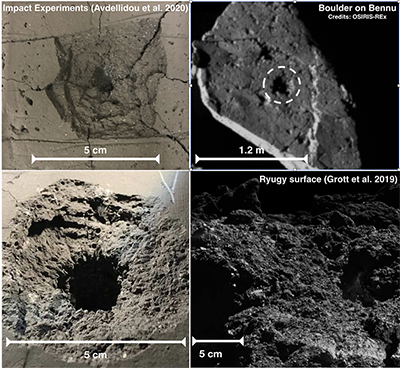 The produced craters after hypervelocity impact experiments in comparison to the surfaces of asteroids Bennu and Ryugu. The image of the crater on Bennu’s boulder is taken from @OSIRISREx.