The stellar structure with the lowest metallicity of the Universe

An international team of researchers including astrophysicists from the Observatoire astronomique de Strasbourg, the Observatoire de la Côte d'Azur and the Observatoire de Paris discovered the remnants of a star cluster whose stars share a uniquely low fraction of elements heavier than Hydrogen and Helium. As successive generations of stars enrich with heavy elements the interstellar gas from which future stars are born, this cluster must have been formed from very early generations of stars and provides a remarkable relic from a time when the very first stellar structures were assembling. It was not known that star clusters with such pristine stars existed — some theories even hypothesized they could not form at all, others that they would have all vanished by now — which makes this a key discovery for our understanding of how stars form in the early Universe.

To study the first stellar structures to form in the universe, astronomers can look at the most distant galaxies, observed as they were a long time ago, in their infancy. Alternatively, one can study the oldest structures in our own galaxy the Milky Way in great detail, an approach that is called « Galactic Archeology ». The vast majority of the stars that surround us were, like the Sun, formed in our Galaxy. However, a small fraction of the Milky Way's stars, favorably found in its outskirts, were brought in from smaller galaxies that gave their stars and stellar clusters to the Galaxy. The discovered cluster was brought in through such a process, but has been shedding its stars as it travels around the Galaxy as a result of tides, leaving a « stream » of stars on the sky.

This exciting discovery, published in the prestigious journal Nature, illustrates the power of bringing together observers and theorists from across the world to share their enthusiasm and expertise around the Pristine project ( Pristine - A survey of the first Galactic stars). The international team unveiled the remarkable stellar cluster structure thanks to the combination of data from the Gaia spacecraft combined with observations from multiple ground-based telescopes.

To start, a team of researchers in Strasbourg had explored the unprecedentedly detailed map of the location and movement of stars gathered by the Gaia spacecraft, launched by the European Space Agency in 2013, with a novel algorithm to isolate the rare groupings of stars moving in concert. One of the structures discovered in this way is a new candidate stellar stream that the team called « C-19 ».

In parallel, the Pristine team, led by Nicolas Martin of the Observatoire astronomique de Strasbourg and including Vanessa Hill and Georges Kordopatis from the Observatoire de la Côte d’Azur, surveys the sky at the Canada-France-Hawaii Telescope in Hawaii since 2015 through a filter specially designed to systematically measure the fraction of heavy elements, or « metallicity », in millions of stars (see insert). The Pristine measurements thus revealed the surprising news that C-19 contains stars with an extremely low heavy element fraction.

Follow-up observations with the Gemini North Telescope in Hawaii and Gran Telescopio Canarias in La Palma revealed that these stars hold the distinct chemical signature of a star cluster. These detailed observations also confirmed the exceptionally low levels of heavy elements present in its stars: as low as 0.04% of that observed in our Sun and well below any other known structure in the universe.

This remnant from ancient times opens a direct and unique window into the early epochs of star formation in the universe and the build-up of stellar structures in these very early times. The continuously improving maps of the Milky Way from the Gaia mission and the Pristine survey will help improve the discovery of such exceptional grouping of stars as precious fossils from ancient times. 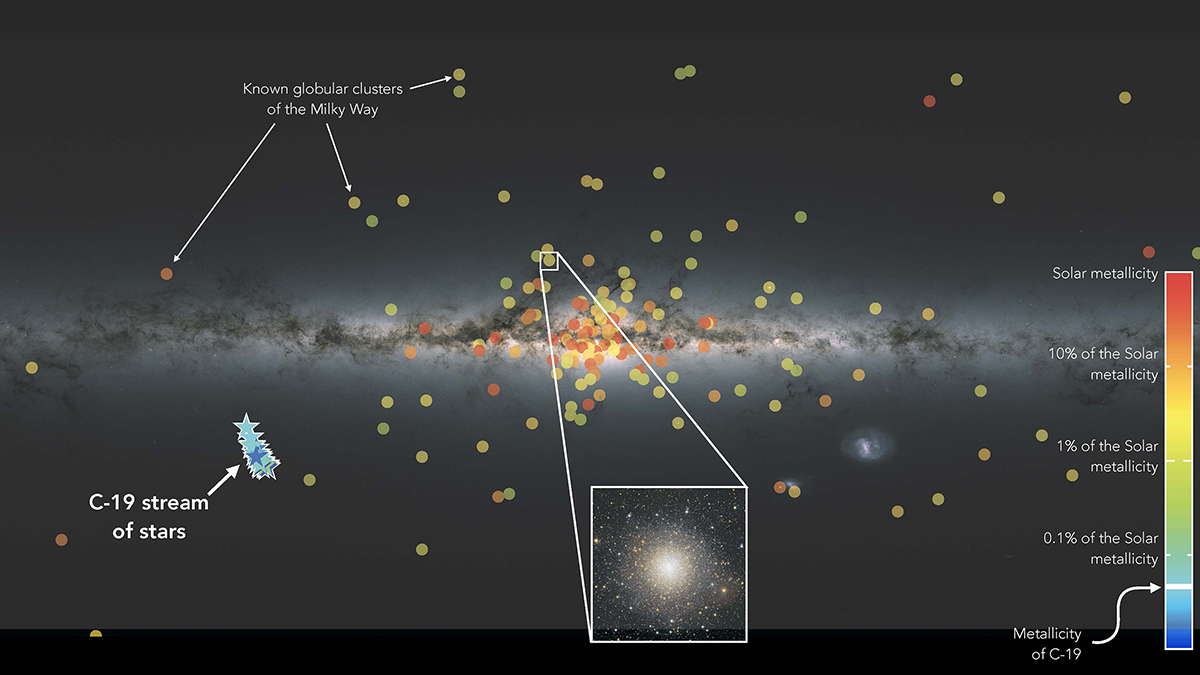 Figure 1 : A map of the Milky Way globular clusters overlaid on top of the Milky Way map obtained by the Gaia satellite. Each cluster is a grouping of thousands to millions of stars as shown in the insert. The color of the symbols represents their « metallicity », which corresponds to their fraction in heavy elements with respect to the Sun. The stars of the C-19 stream are shown with star symbols and have a much lower metallicity than any cluster, 2500 times fewer heavy elements when compared to the Sun. Crédits : © N. Martin & Observatoire Astronomique de Strasbourg ; Canada-France-Hawaii Telescope / Coelum; ESA/Gaia/DPAC 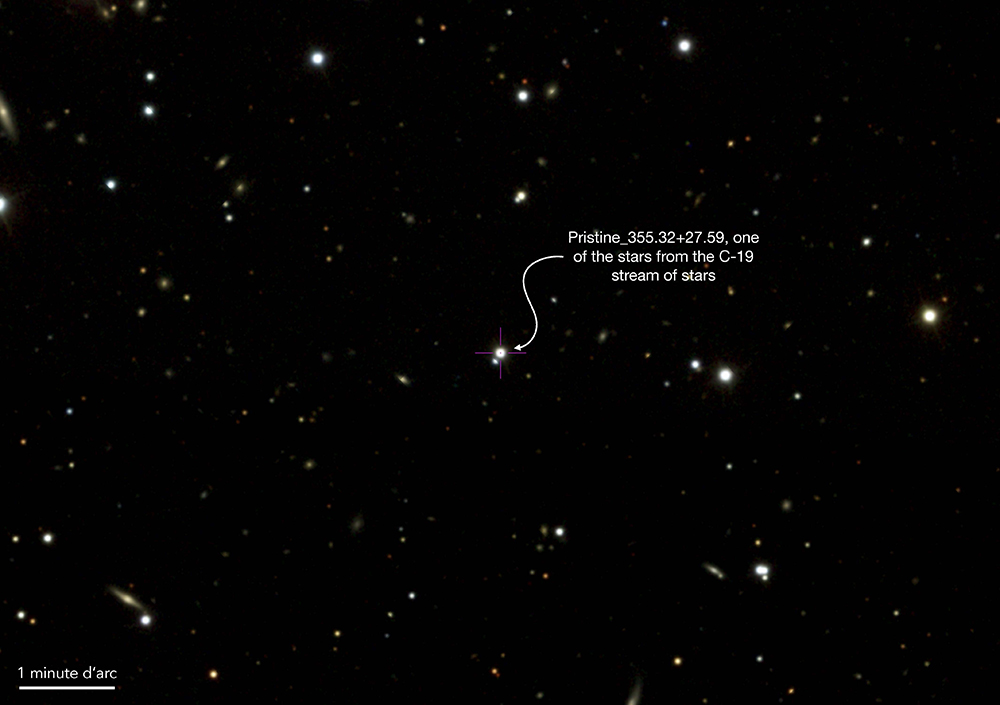 Figure 2 : At face value, nothing distinguishes C-19 stars from other stars of the Milky Way. Only the tiny but very precise movement of the star measured by the Gaia spacecraft and the observation of its metallicity in the metallicity map from the Pristine survey made it possible to isolate this star as part of the remnant of an exceptionally low metallicity stream of stars. Crédits : Image from the Sloan Digital Sky Survey in the Aladin software (Observatoire astronomique de Strasbourg)

The metallicity of stars

As Cecilia Payne realized in 1925, our Sun is composed mainly of the two lightest elements in the universe, hydrogen and helium: in fact, they account for 98.5% of the Sun. The sum of all the other heavier atomic elements (carbon, oxygen, iron, etc.) represents only 1.5% of the total mass of our star. The vast majority of these heavy elements is produced within massive stars. As these reach the final stages of their evolution, they give these elements to the interstellar gas through winds or as they explode as supernovae. New stars, like the Sun 4.5 billion years ago, are born from this now enriched interstellar gas. This implies that the first generations of stars were very poor in heavy elements. The stars that make up the C-19 stream show abundances in heavy elements that are 2500 times lower than those found in the Sun!