Measurements of the equivalence principle had not been improved upon for 10 years, but now the first results from CNES’s Microscope satellite, equipped with accelerometers supplied by the French aerospace research agency ONERA, are 10 times better. They show, with an unprecedented precision of 2.10-14, that bodies in a vacuum fall with the same acceleration. The equivalence principle has so far proved unshakeable and this result simply reconfirms the theory of general relativity postulated by Albert Einstein over a century ago. 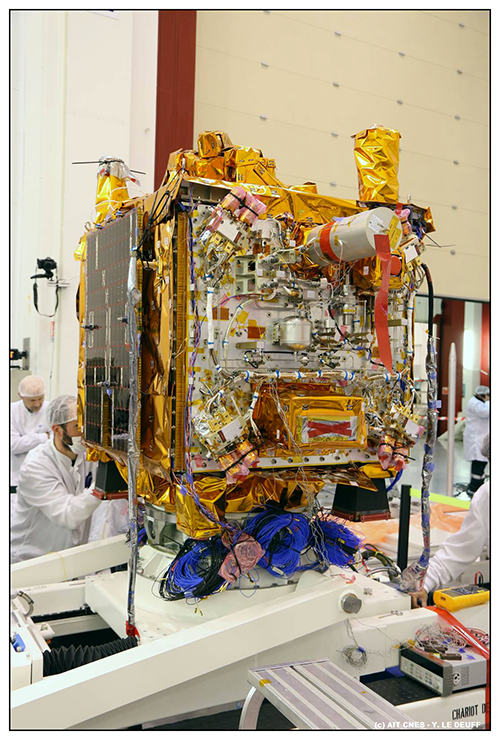 According to this theory, time and space are interwoven in a four-dimensional space-time fabric warped by gravitation. It has been verified experimentally recently with the detection of gravitational waves. But the quantum field theory, another leading theory of the 20th century that faithfully describes the world of particles and the infinitely small, would seem to be irreconcilable with general relativity. A universal theory unifying gravitation and quantum physics is therefore the holy grail of physicists in the 21st century. Certain candidate theories predict that the principle of the equivalence between gravitation and acceleration, at the heart of the theory of general relativity, could be violated at very weak levels. Microscope is pushing this principle to its limits and yielding new indications to constrain the theory of general relativity.

The Microscope team has already achieved a factor-of-ten improvement in the precision of test measurements after analysing just 10% of the data from the satellite. This result obtained by the teams at Geoazur (CNRS-OCA-Université Côte d’Azur-IRD) and ONERA with support from CNES and the ZARM centre of applied space technology and microgravity is reported in the prestigious scientific journal PRL. It confirms the universality of free fall and shows that the equivalence principle is not violated. Microscope was launched on 25 April 2016. The science phase of the mission began in December 2016 and has already collected data from 1,900 orbits, the equivalent of a free fall of 85 million kilometres or half the Earth-Sun distance.

«The satellite’s performance is far exceeding expectations. Data from more than 1,900 additional orbits are already available and more are to come, which should enable us to further improve the mission’s performance and approach its target of acquiring measurements with a precision of 10-15. This first result is going to shake the world of physics and will certainly lead to a revision of alternative theories to general relativity,» said the mission’s principal investigator Pierre Touboul.

Microscope (MICROSatellite à trainée Compensée pour l’Observation du Principe d’Équivalence) is a CNES mission in partnership with ONERA, OCA, ESA, the German space agency DLR, the ZARM centre of applied space technology and microgravity and the German metrology agency PTB. The satellite’s orbit is finely controlled and it compensates for residual atmospheric drag with a degree of precision never achieved before in low-Earth orbit. T-SAGE (Twin Space Accelerometer for space Gravity Experiment) is a differential accelerometer instrument developed by ONERA at the core of this laboratory in perfect free fall, housed inside a protective cocoon where the thermal stability is of the order of 0.00001 degrees. It measures the position of the proof masses in free fall around Earth at atomic scale.

CNES (Centre National d’Etudes Spatiales) is the government agency responsible for shaping France’s space policy and executing it in Europe. Its task is to conceive and orbit satellites, invent the space systems of the future and nurture new services to aid us in our daily lives. Founded in 1961, it is the initiator of major space projects, launch vehicles and satellites, and the partner of choice for industry fuelling innovation. The 2,500 employees at CNES’s four centres of excellence are working to open up new and infinite fields of applications in five core areas of focus: Ariane, science, Earth observation, telecommunications and defence. The agency is a key player driving technology research, economic development and industrial policy for the nation. It also fosters scientific collaborations and has forged numerous international partnerships. France, represented by CNES, is the leading contributor to the European Space Agency (ESA).

ONERA is a key player in aeronautics and space research, employing approximately 2,000 people. Overseen by the Ministry of Defence, it has a budget of €230 million, of which more than half comes from commercial contracts. As a government expert, ONERA prepares tomorrow’s defence systems, meets future aerospace challenges and contributes to the competitiveness of the aerospace industry. It is an expert in all of the disciplines and technologies of its field. All major civil and military aerospace programmes in France and Europe—Ariane, Airbus, Falcon, Rafale, missiles, helicopters, engines, radars—have some of ONERA’s DNA in them. Its highly renowned team of researchers have won many awards and are mentoring many doctoral students.

About the Cote d’Azur Observatory

The Cote d’Azur Observatory (OCA) is an astronomical observatory. It is administratively and financially independent, spearheading the region’s research activities in Earth and Universe sciences at three joint research units: Artemis, Geoazur and Lagrange. With 450 people located at four sites (Mont Gros and Valrose in Nice, Sophia Antipolis and the Plateau de Calern observatory), OCA is one of 25 French astronomical observatories responsible for the continuous and systematic collection of observational data on the Earth and the Universe. Its role is to explore, understand and disseminate knowledge about Earth sciences and astronomy. It is a member of the Cote d’Azur University academic community (ComUE).

CNRS, the French national scientific research centre, is the leading public research organization in Europe. Its core mission is to advance knowledge for the benefit of society. With nearly 32,000 employees, a budget of €3.3 billion (€769 million from its own resources) and research facilities all over France, CNRS carries out research in all disciplines through its more than 1,100 research and service units. CNRS has a long heritage of excellence, with 21 Nobel Prize and 12 Fields Medal winners in its ranks. Every year, CNRS awards its gold medal, considered the highest scientific distinction in France.