The first light of MATISSE

After 12 years of design and development in Europe, the MATISSE interferometer has been installed during the last 3 months at ESO ‘s Very Large Telescope. February 2018, this new, powerful and technically challenging instrument successfully achieved ‘First Light’. This achievement consummates the decade-long efforts of dozens of engineers and astronomers in France, Germany and in the Netherlands.

MATISSE is a second-generation Very Large Telescope Interferometer (VLTI) instrument providing extremely high spatial resolution. It is a combined imager and spectrograph for interferometry in the mid-infrared 3–5 μm region (L- and M -bands) and the 8–13 μm window (N-band). MATISSE builds on the experience gained with the VLTI’s first-generation instruments, but vastly extends their capability to produce detailed images. The instrument exploits multiple telescopes and the wave nature of the light to produce more detailed images of celestial objects than can be obtained with any existing or planned single telescope. High resolution imaging in the infrared is technically demanding but has yielded spectacular results in detecting planet-forming discs around stars, images of the surfaces of stars, and dusty accretion discs around Active Galactic Nuclei (AGNs)

Because of the technical challenges, only a few mid-infrared interferometers have observed prior to MATISSE: the SOIRDETE prototype at the Plateau de Calern in France, the ISI interferometer of the Berkeley University and the Keck interferometer in the US, and, the ESO-MIDI instrument. MATISSE is designed for a broad range of science goals with as prime science cases the studies of the discs around young stars and AGNs.

Its capability is unique in the world: It will open the infrared L- and M-bands (respectively 3.0–4.1 and 4.6–5.0 μm) to long-baseline infrared interferometry. The angular resolution in the L band will be about 3 milliarcseconds (mas), equivalent to 0.3 AU for a star at 100 parsec distance. With various spectral resolutions between R ~ 30 and R ~ 5000, MATISSE can distinguish characteristic atoms and molecules in stars and galaxies, while keeping high sensitivity to continuum emission. The second unique capability is high-fidelity mid-infrared imaging — closure-phase aperture-synthesis imaging — performed with up to four Unit Telescopes (UTs) or Auxiliary Telescopes (ATs).

First fringes on MATISSE were obtained both on L & N bands with 4 ATs on Sirius, February 18th 2018.

The MATISSE spectral bands will provide near-infrared high angular resolution images that can be linked to observations at similar resolution in the millimetre domain, with the Atacama Large Millimeter/Submillimeter Array (ALMA). MATISSE can be seen as a successor to MIDI (the MID-infrared Interferometric instrument) and a precusor of the future METIS instrument for the ELT. 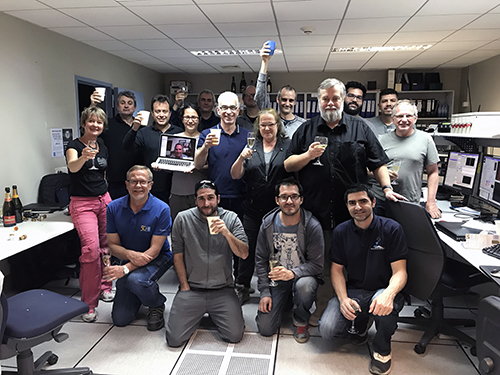 The success of this MATISSE first light is a tribute shared by the many engineers and researchers and their institutes which are involved in this project. Together with GRAVITY operating at the VLTI, MATISSE is a complex and challenging instrument: 3 tonnes, more than ten thousand elements machined and aligned to better than a thousandth of a millimetre, 20 cubic metres of volume.
Further testing of MATISSE will continue through 2018 and normal observations, open to all ESO astronomers, will begin early in 2019.

MATISSE was designed, funded and built in close collaboration with ESO, by a consortium composed of French (INSU-CNRS in Paris and OCA in Nice hosting the P.I. team), German (MPIA, MPIfR and University of Kiel), Dutch (NOVA and University of Leiden), and Austrian (University of Vienna) institutes. The Konkoly Observatory and Cologne University have also provided some support to the manufacture of the instrument.