The chemical signature of the Galactic spiral arms revealed by Gaia

The spiral arms of our Galaxy, the Milky Way, have a significant impact on the chemical composition of stars. This result, newly discovered, plays a fundamental role in the study of our Galaxy and the chemical elements composing not only the stars, but also the Earth and the living beings. The study leading to this conclusion has been carried out by a team of researchers from the Côte d’Azur Observatory – Côte d’Azur University-CNRS (Nice, France) and from the Torino Observatory (Italy). This team has been led by Eloisa Poggio, an Italian scientist working at the Côte d’Azur Observatory funded by a European Marie-Curie postdoctoral grant.

Using data from the Gaia satellite, that maps up to 2 billion stars in our Galaxy, this team has studied the chemical composition of several groups of stars located in a radius of 13 000 light-years (4 Kpc) around the Sun. « The chemical composition of a star is like the DNA: it informs us about the characteristics of the star's birth place and it remains unchanged throughout its life », explains Alejandra Recio-Blanco, head of the Gaia / Milky Way team at the Côte d’Azur Observatory, and co-author of the paper.

The present study is focused on the abundance of chemical elements composing the stars that are heavier than Hydrogen or Helium. They are called « metals » in astrophysics. The franco-italian team has shown that young stars located in the spiral arms of the galaxy are richer in metals that those out of them. This shows the influence of the spiral arms in the chemical evolution of the Galaxy. « The morphology of the spiral arms is printed over the Milky Way disk chemical maps, adding to other already known factors as the distance to the galactic center », confirms Eloisa Poggio. 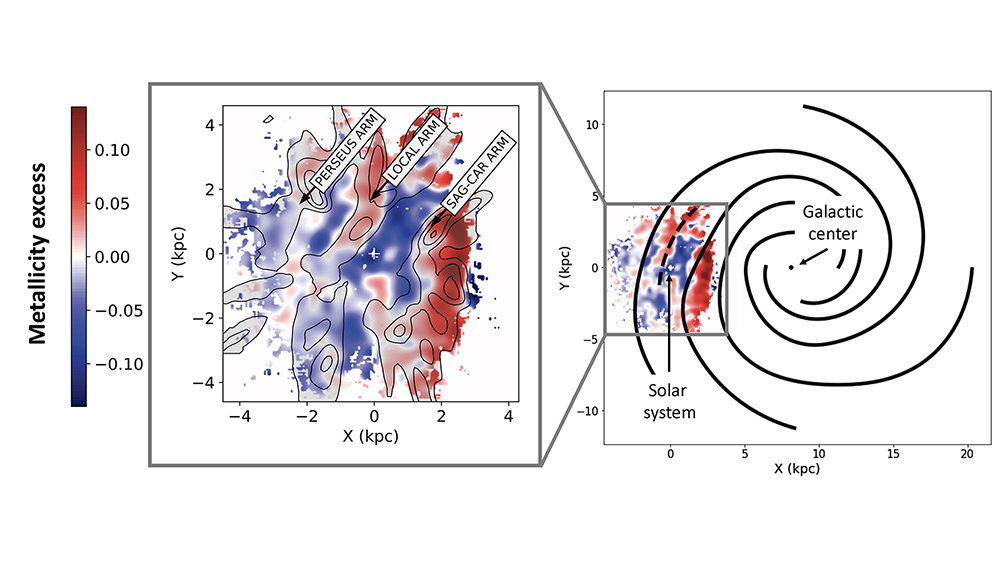 Metal abundance excess in the stars observed by the Gaia satellite and analyzed in this work. Young stars located in the spiral arms of the galaxy are richer in metals (in red in the left-hand plot) that those out of them. The schematic galactic structure is shown in the right-hand plot.