Novel image processing techniques have been discussed today at the 2016 SKA Science Conference in Goa, India, as French researchers have updated the international astronomy community on promising work being undertaken in France to develop new algorithms for radio astronomy, with potential applications beyond.
French teams from Observatoire de Paris, Observatoire de la Côte d’Azur, AIM Laboratory, ENS Cachan and Université Paris X are actively working on state-of-the-art algorithms for calibration and deconvolution – removal of artefacts in the images – of radio astronomy observations.

A French team from Observatoire de Paris led by Dr Cyril Tasse is working on developing the equivalent of "adaptive optics" for radio astronomy. Adaptive optics systems – as used in world-class optical astronomy facilities such as ESO’s VLT in Chile – measure how atmospheric turbulence affects known sources in the sky, to then deform active mirror surfaces and compensate for the turbulence, thus resulting in much sharper images. In effect, these systems almost correct the effects of the atmosphere.
"In optical astronomy, you apply this correction to the mirror. In radio-astronomy you apply the correction in the supercomputer doing the image processing", explains Dr Chiara Ferrari, Coordinator of SKA-France (see note).
While self-calibration tools already exist in radio astronomy, the French team has developed next-generation “direction-dependent” algorithms that cope with the changing nature of the ionosphere over the observed portion of the sky. These algorithms measure how the signal from known sources in the sky in the area of observation is affected by the turbulence from the ionosphere, and then apply a correction in post processing to cancel those effects. The team recently tested their algorithm on observations of the international LOFAR telescope (from the LOFAR Surveys project, led by Prof Röttgering), producing very promising results. 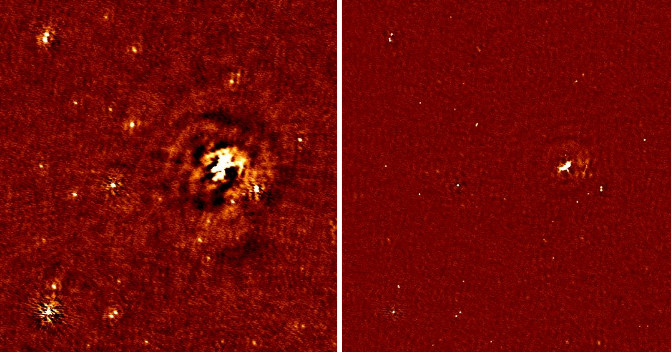 Results of classical (left) and next-generation calibration (right) on a small portion of the so-called
« Bootes field » observed for 8 hours with the LOFAR telescope at 150MHz
Data courtesy: LOFAR Surveys, Röttgering et al.

In collaboration with the group of Prof. Oleg Smirnov in South Africa, these next-generation algorithms were also recently used to process the first light image of MeerKAT, one of the SKA precursor telescopes located in South Africa, resulting in a very detailed image where some 1200 previously unknown galaxies were discovered.

In parallel, researchers from Observatoire de la Côte d’Azur and AIM Laboratory have been working on developing new image reconstruction tools. Radio-astronomy observations use so-called Fourier Transforms to create images from observed data. In order to reproduce the image that best models the observed sky, astronomers need to get rid of artefacts in the images caused by the telescope itself, through an operation called “deconvolution”.
Classical deconvolution algorithms assume that the sky is populated by sources whose shape can be described mathematically by one set of functions. The work developed by the French teams are based on assuming a wider set of functions. Results obtained so far show that this new tool produces images with better angular resolution (capacity to see more details) and an increased sensitivity (capacity to detect faint objects).
Remarkably, the algorithm developed by AIM researchers (Labex UnivEarthS / CosmoStat) was applied to LOFAR observations of the Cygnus A radio galaxy, obtaining a “super-resolution” image. 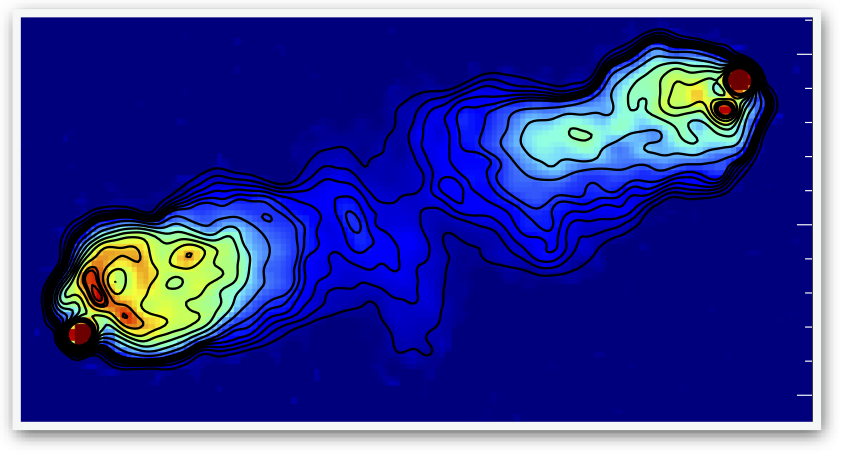 Top: LOFAR observations at 150 MHz of the Cygnus A radio galaxy. Image obtained before deconvolution (left),
and after deconvolution: with classical tools (centre) and with the new algorithm developed at AIM laboratory (right).
The new algorithm allows to obtain a model image with a better angular resolution (“super-resolution”) than classical algorithms.
Bottom: contours of radio emission from a 327.5 MHz image of Cygnus A obtained with the VLA are overlaid
on the super-resolution LOFAR image at 150 MHz. Since observations at higher frequencies produce higher resolution images,
this comparison shows that the details observed on the “super-resolution” LOFAR image are confirmed by the image obtained
through classical deconvolution method on the VLA observations.
Extracted from Garsden et al., 2014, A&A 575, 90


"Since such techniques are currently successfully tested on observations of SKA precursors and pathfinders, we expect them to be of great use once the SKA is operational, allowing researchers to push the limits of image quality with the telescope even further", adds Dr Ferrari.
Beyond astronomy, these techniques also have many other potential applications.
"These image processing techniques are of course exciting for astronomy, but can also be applied to any field where image processing is needed, and so are equally promising for medical imaging and Earth observation", concludes Dr Ferrari.

The Square Kilometre Array (SKA) project is an international effort to build the world’s largest radio telescope, led by SKA Organisation based at the Jodrell Bank Observatory near Manchester. The SKA will conduct transformational science to improve our understanding of the Universe and the laws of fundamental physics, monitoring the sky in unprecedented detail and mapping it hundreds of times faster than any current facility.
The SKA is not a single telescope, but a collection of telescopes or instruments, called an array, to be spread over long distances. The SKA is to be constructed in two phases: Phase 1 (called SKA1) in South Africa and Australia; Phase 2 (called SKA2) expanding into other African countries, with the component in Australia also being expanded.
Already supported by 10 member countries – Australia, Canada, China, India, Italy, New Zealand, South Africa, Sweden, The Netherlands and the United Kingdom – SKA Organisation has brought together some of the world’s finest scientists, engineers and policy makers and more than 100 companies and research institutions across 20 countries in the design and development of the telescope. Construction of the SKA is set to start in 2018, with early science observations in early 2020s.

France is an observer country on the SKA Board. SKA-France is a national coordination of industrial, technical and scientific activities preparatory to the SKA project in France, set in place jointly by the Institute for Earth Sciences and Astronomy (CNRS/INSU), Paris Observatory, Côte d’Azur Observatory, Bordeaux University and Orléans University.
France is officially involved in 4 of the 11 consortia designing the SKA telescope, including the Mid-Frequency Aperture Array, Wideband Single Pixel Feed, Low-Frequency Aperture Array and Science Data Processor consortia.