NEAs are generally classified in three classes (Atens, Apollos, Amors) depending on their current orbital elements (see Figure below). Due to their close proximity, they have the advantage of being more easily accessible than other small bodies of our Solar System. Part of their orbit still lies in the asteroid belt, their spectral properties are similar to the ones of asteroids in the main belt, and the largest NEA is a factor ten smaller than the largest asteroid in the asteroid belt. These arguments already suggested that most NEAs come from the main belt, and dynamical studies have confirmed this origin and how they come through different well identified transport routes. These studies have also allowed the possibility to link a specific NEA to a potential source region in the main belt.

Top view of the inner Solar system showing the main asteroid belt and the kinds of orbits on which evolve Apollo, Amor and Aten Near-Earth Asteroids.

NEAs represent both a potentially rich resource for future space exploration and a threat to the very existence of human kind on Earth. Thus, improving our knowledge on the physical properties of these bodies and performing a deflection test will greatly help to better understand the impact risk and to be protected from it. 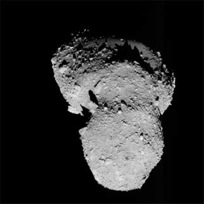 The two Near-Earth Asteroids visited so far by a space mission. Left: The 500 meter-size Itokawa visited by the Hayabusa mission (JAXA); right: the 23 km-size Eros visited by the NEAR mission (NASA/APL). 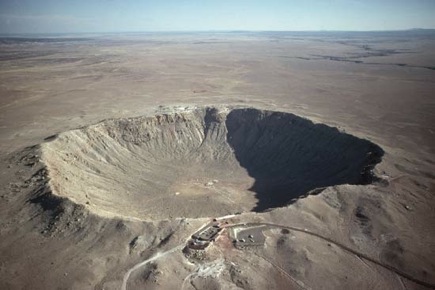 Meteor crater in Arizona (USA): the diameter is 1.2 km and depth is 200 m. It was formed by a projectile about 30-50 meters in size a few tens of thousands years ago.

Finally, Near-Earth Asteroids (NEAs) are of high scientific interest as they are representative of the population of asteroids that are thought to be the primitive leftover building blocks of the Solar System formation process. So, they offer clues to the chemical mixture from which the planets formed some 4.6 billion years ago. They carry records both of the Solar System’s birth/early phases and of the geological evolution of small bodies in the interplanetary regions. In contrast to the planets, which underwent evolutionary processes during their history, most asteroids due to their small sizes are believed to have retained a record of the original composition of the proto-planetary disk in which they were formed. Thus, they can be considered as the DNA of the Solar System which can give some hints on the origin of planets and Life.