The internal structure of the giant planets of the solar system is poorly known. The presence of a rocky core inside Jupiter, for instance, is still subject to debate, with important consequences for the formation scenario of the Solar System, but also for our understanding of the structure and composition of exoplanets. 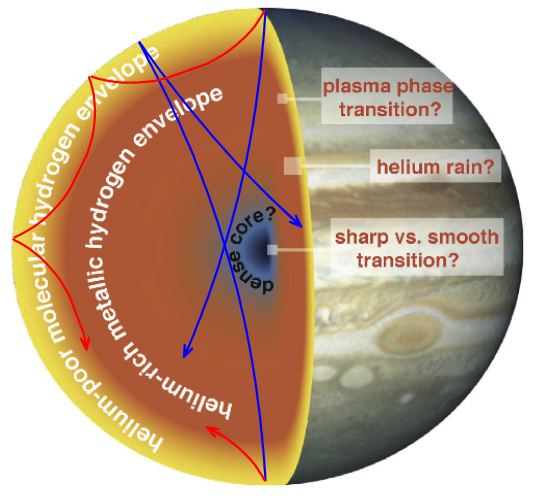 As it has been shown for the Earth, for the Sun and stars, seismology is an extremely powerful tool to study the deep interiors of these objects. This possibility had been contemplated for Jupiter and Saturn since the beginning of helioseismology in the 1970’s. It has recently been proved to be a reality by the first detection of oscillations on Jupiter and the measurement of its fundamental acoustic frequency, in line with theoretical predictions by the SYMPA project. Recent detection of f modes of Saturn as seen by the effect on the rings completes this new landscape and opens a new window in planetology with the possibility to directly probe their internal structure.

The JOVIAL project is the necessary next step in this new field. Its aim is to observe Jupiter’s oscillations and identify its modes up to a degree l=25 at least, in order to definitively answer the question of the existence of a Jovian rocky core. JOVIAL will also observe p modes on Saturn, where surface modes were recently identified.

Seismic measurements on giant planets require almost continuous observations for several weeks, with a specially designed instrument, able to detect tiny periodic motions at the surface of the planets. JOVIAL is a worldwide network of dedicated instruments, based on the same principle as SYMPA, but largely improved in term of sensitivity, image quality and stability.

A prototype of this new Doppler Spectro Imager (DSI) has been developed and tested at OCA and is presently installed at the C2PU 1-m telescope at Calern Observatory, near Nice. A copy of it is being built for its installation at the 1-m telescope at Apache Point observatory, in New Mexico, in the frame of the JIVE project.

JOVIAL aims to develop a new version of the instrument, more versatile and with higher image quality, that will be installed on the 1.88m telescope at the Okayama observatory, Japan. This will complete the worldwide network in order to achieve a duty-cycle higher than 50 % for several weeks of observations. It will reach unprecedented angular resolution, thanks to a specially designed Adaptive Optics module. Moreover, it will permit to seek for 2-m class telescope or larger for observations of Saturn, which require larger light collectors.

Two first observation runs will be performed around Jupiter’s conjunction in May 2018 and Saturn’s conjunction in June 2019. New interior models of Jupiter and Saturn will be derived from the identification of the acoustic modes and the precise measurement of their frequencies. It will allow a definitive determination of the core’s size and the determination of the density and internal rotation along the interior. This will perfectly complete the gravitational moments measured by the JUNO spacecraft to get a full sketch of the physics and evolution of giant planets.

JOVIAL will also measure Jupiter’s zonal winds with a precision of about 5 m/s for an horizontal resolution of about 3000 km. These first direct measurements of wind speed will be compared to the ones obtained by cloud tracking to estimate the influence of waves in maintaining the planet’s complex dynamical atmospheric structure.