Settling, re-suspension and scavenging of aerosols 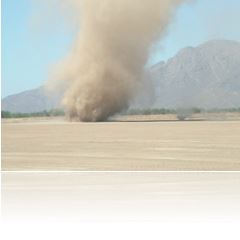 The tiny heavy particles (particulate matter) forming atmospheric aerosols interfere strongly with local and global, meteorological and climatic processes: they are the seeds of condensation in clouds, so that they alter the size distribution of water droplets; they scatter or absorb light in the atmosphere. Such particles interact with the flow through a viscous drag; the resulting entrainment by turbulence and gravitational force compete in their motion and an important effort is required to describe the statistics of this intricate dynamics.

It is proposed to attack the problem of estimating aerosol residence times in the atmosphere. This requires quantifying with accuracy the fundamental dynamical and physical mechanisms that create particles and make them rise or sink.

Chemical formation and growth of aerosols

An important part of anthropogenic aerosols, as for instance those forming smog, come from the photochemical reaction of primary gaseous pollutants to create particulate matter. Much effort has been devoted to describe from first principles the various mechanisms entering this process. The inherent complexity (nonlinear dependence on the concentration, humidity, acidity, temperature...), combined with turbulent mixing, affects the accuracy of models. The goal is to develop a new approach to give a statistical handling of the basic phenomena. A particular attention will be devoted to understanding the formation of regions with large particle concentrations that are triggering particle aggregation and growth.

The fall speed of particles in a turbulent flow differs strongly from that in a still fluid. Settling can be accelerated or decelerated depending on turbulence intensity and on the particle response time. The fluctuations in the vertical motion of the particles relate to violent upward or downward accelerations of the fluid. However, because of their inertia, heavy particles concentrate in strain-dominated regions where acceleration is typically less intermittent. Also, flows presenting anisotropies or inhomogeneities in the vertical direction alter sedimentation and might trigger trapping events where particles remain suspended for a time much larger than expected. The purpose is here to provide a detailed understanding of the interplay between these various effects and to characterize the settling velocity as a function of the turbulence characteristics and particle mass and size.

Deposition fluctuations are determined by the particle dynamics near the flow boundary.  High concentrations are observed in the low-speed streaks of the near-wall flow, leading to strong inhomogeneities in the location and speed at which they deposit on the wall. A first goal is to study the statistics of deposited particle concentrations and to understand the effects of boundary conditions (no slip, free slip, or intermediate). A second objective is to improve the understanding of the physical mechanisms responsible for the particle re-suspensions, which are associated to violent fluctuations of the velocity. An accurate model of the microphysical mechanisms, and in particular of the lift forces acting on deposited particles, is still missing.

Rain is known to give an important but unresolved contribution to the transfer of aerosol particles onto the ground. This “wet deposition” originates from the scavenging of particles by drops during their precipitation. It is proposed to detail the statistical properties of this process and to quantify it as a function of the rain type and the particle characteristics. A particular attention will be devoted to understand the effect of the correlations between aerosol concentration fluctuations and the spatial intermittency of rain intensity.