Radiative and climatic effects of particles 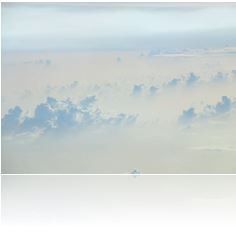 Anthropogenic aerosol particles exert an uncertain impact on climate. They have a direct cooling effect as they partly reflect sunlight and thus reduce the solar radiation reaching Earth surface. Also, their role as condensation nuclei in clouds causes an indirect effect: a high concentration of particles spreads water vapor over a larger number of smaller particles; a straightforward consequence is an increase of both the reflective properties and the lifetimes of clouds (referred to as the 1st and 2nd aerosol indirect effects). A detailed description of the underlying microphysical phenomena is expected to give a significant breakthrough in their comprehension and modeling.

Quantifying the combined effect of a broad size distribution and of the presence of strong fluctuations in aerosol spatial distribution onto their radiative properties is still an open and challenging question. It is proposed to attack this problem in order to provide estimates for absorption and scattering of light by heavy particles suspended in a turbulent flow.

Effects on the cloud size distribution and lifetime

The issue addressed here concerns the two aerosol indirect effects on climate. While the presence of aerosols increases the number density of cloud droplets, it may also broaden their size distribution. Neglecting this mechanism leads to overestimating cooling effects. Determining the physical processes responsible for the dispersion of droplet sizes will give a handle on this still-open question.