The core program of CHARA/SPICA is related to fundamental parameters of stars and planets. The combination of Gaia parallaxes, the high-precision measurement of the transit of exoplanets with the PLATO space mission, and CHARA/SPICA angular diameters will provide the radius of exoplanets with 1% precision. Besides, determining the radii of asterosismic targets (using 'à la carte' approach or scaling relations) will bring constrain on the mass of stars, and these measurements be used to improve stellar evolution models, and, in fine, stellar age. In addition, the imaging capacities of CHARA/SPICA will be used mainly to study binaries (mass determination), limb-darkening and stellar rotation. Besides, constraining surface-brightness color relations associated to several parts of the HR diagram is fundamental in order to determine the angular diameter of any non-active stars, even faint, for PLATO, but also for the distance determination of early-type eclipsing binaries (for e.g. in M31 and M33), which is crucial for the calibration of the Hubble constant (in collaboration with the Araucaria Project).

One of the main challenge of the CHARA/SPICA instrument (Mourard et al. 2018) is to measure a sample of 1000 stars and to feed the OIDB database of JMMC. Observations are expected to start at the end of 2021. We have defined a first phase of 3 years (2022-2024) aiming at measuring 800 diameters and obtaining 200 images of surface of stars. In the second phase (2025/2026), CHARA/SPICA will cover extensively the PLATO field and additional science programs will be developed (Cepheids, disk of Be stars, interacting binaries, ...; see Stee et al. 2017, white book). After the launch of the PLATO mission (>2027), CHARA/SPICA will continue its science collection and will serve as ground follow-up of interesting PLATO targets. For bright PLATO stars, direct measurements will be done. For faint PLATO stars, we will use surface-brightness color relations (based on the observations of the 800 stars). The CHARA/SPICA group is part of the WP122300 ("Non seismic diagnostics and and model atmosphere" of PLATO) in order to prepare the implementation of the CHARA/SPICA data into the PLATO pipeline. There is also work in collaboration with WP125500 ("Benchmark stars for PLATO"). 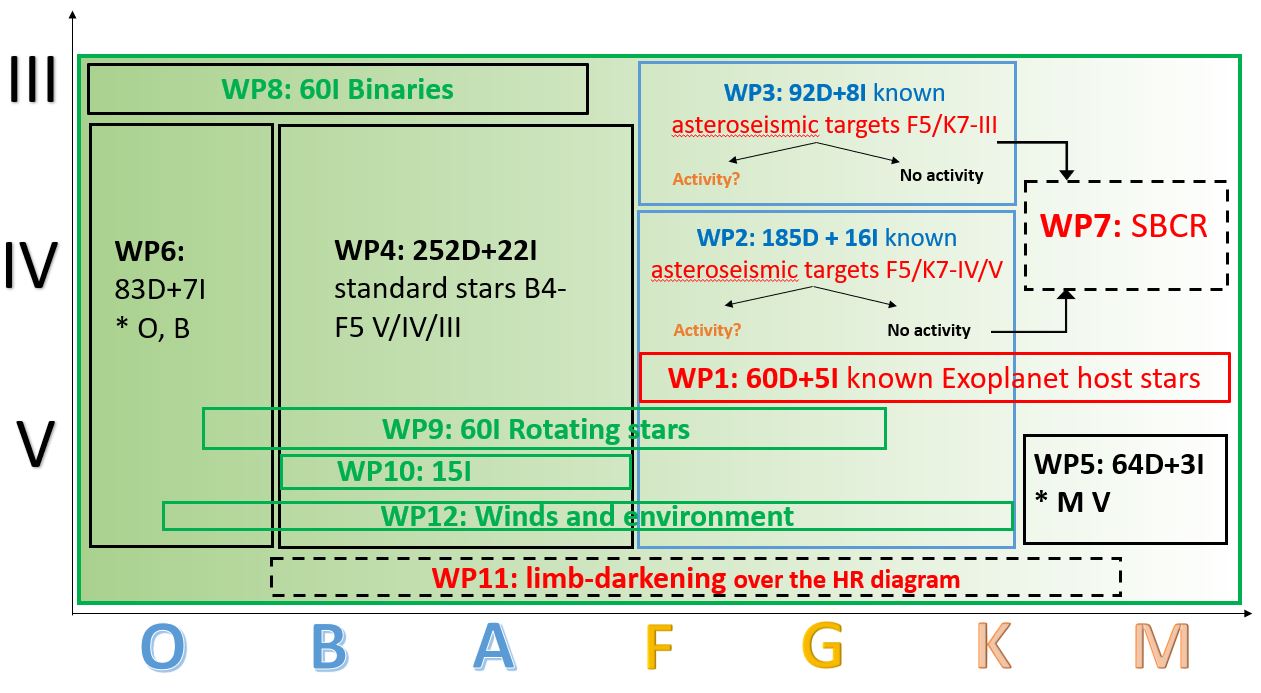 Repartition of the ISSP sample as a function of the spectral type and luminosity class. 12 sub-samples cover the four main science cases in red (Exoplanet host stars, asteroseismic targets, SBCR, and limb-darkening/activity). The size of the samples is either exhaustive or defined as 4 stars per luminosity class and spectral bin. This gives approximatively 800 stars for diameter (D) and 200 for more detailed studies (I). WP7-12 are considered as transverse over the HR diagram.

The standard stars (i.e. the non active ones) will be used to build the SBCRs (WP7) in the different regions of the HR diagram: O, B1, B2, B3  for the calibration of the distance scale (distance of M31/M33 eclipsing binaries), B4-F5 to fill the current gap in the interferometric databases (cf. JMDC), and stars later than F5 for the preparation of the PLATO space mission. These relations will be differentiated with respect to the luminosity class.

More information can be found on the CHARA/SPICA-sg kick-off meeting. All presentation are online  as well as the slides summarizing the discussion in the working groups.