To achieve these science goals, we propose to study a new visible beam combiner for the CHARA array, called CHARA/SPICA. It is designed for the measurement of the angular diameters of 1000 stars and will provide a major step forward in terms of magnitude and precision with respect to the present situation.

The combination of the six CHARA telescopes equipped with AO with a low-resolution spectrograph (50 channels over 600–900 nm) will yield 750 different spatial frequencies in one single observation and thus will allow precise determinations of angular diameters.

For a subsample of bright stars, a medium spectral resolution mode (200 channels over 40 nm) will allow spectral imaging of stellar surfaces and environments for higher accuracy on the stellar/planetary parameters and studies on the kinematics of environments and atmospheres.

To push the limiting magnitude in the different modes and give access to a large sample of stars, CHARA/SPICA is assisted by a fringe tracking system in the H band to reach “long” (200 ms–few s) exposures of the fringe signals in the visible. The design is based on the

FRIEND prototype extended to 6T. A great advantage with a fibered instrument is that the injection module and the instrument itself are completely decoupled. This is not only interesting for implementation but also for the alignment where all the efforts could be focused on the injection system. 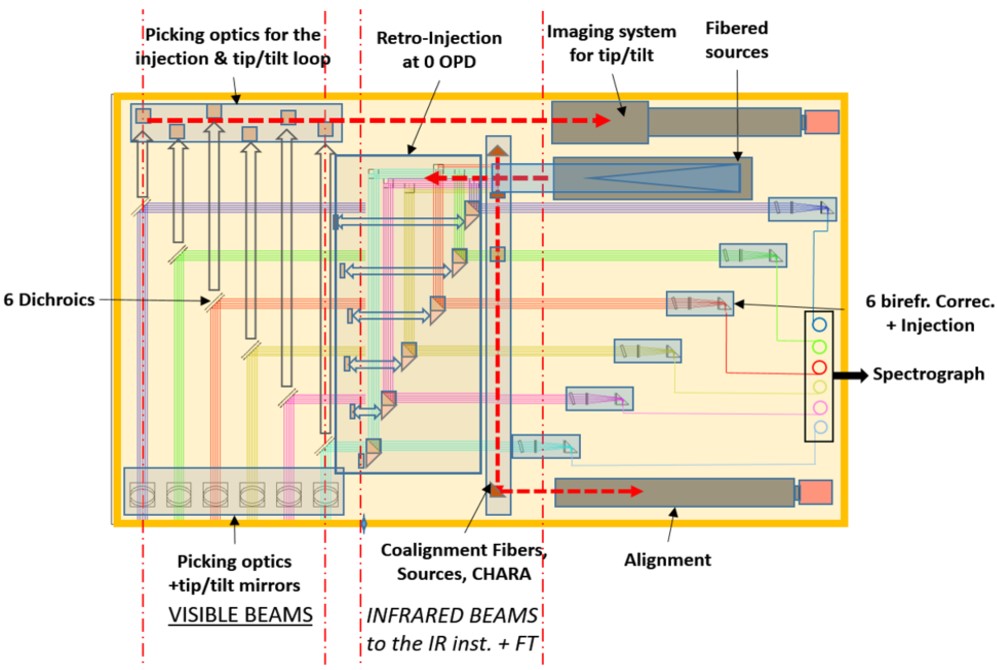 Current design of the SPICA/CHARA instrument from the input beams from CHARA to the injection in the single mode fibres.

Design of the CHARA/SPICA spectrograph (not final one)