The Gaia satellite helps us to better understand our galaxy

Like many other galaxies, our home galaxy, the Milky Way, is characterised by large-scale spiral arms. However, our Solar System is embedded in the Galactic disc, making the large-scale mapping of the Galaxy a quite difficult task. As a consequence, there is currently no consensus about their properties. For example, we don't know exactly how many spiral arms are present in the Galactic disc, or where exactly they are located.

The Gaia satellite is currently mapping the Milky Way by measuring positions and motions for more than one billion stars with strong accuracy and unprecedented detail. Using this wealth of information, an international team of researchers lead by Eloisa Poggio, Post-doctoral fellow, mapped the spatial distribution of young stars in the Galactic disc. They found that some regions in the Galactic disc are more populated than others (also called "overdense" regions). Those regions indicate the location of the nearest spiral arms in our Galaxy (within 4-5 kiloparsec from the Sun). 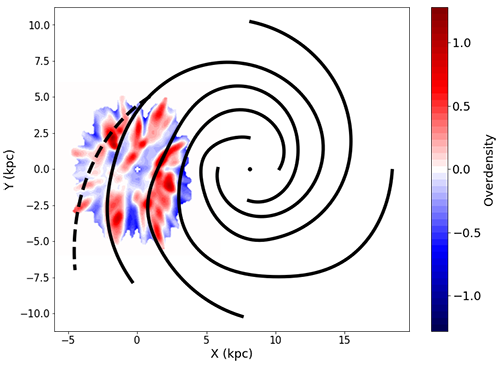