NASA’s Webb Reveals an Exoplanet Atmosphere as Never Seen Before

WASP-39 b is a planet unlike any in our solar system – a Saturn-sized behemoth that orbits its star closer than Mercury is to our Sun. This exoplanet was one of the first examined by NASA’s James Webb Space Telescope when it began regular science operations. The results have excited the exoplanet science community. Webb’s exquisitely sensitive instruments have provided a profile of WASP-39 b’s atmospheric constituents and identified a plethora of contents, including water, sulfur dioxide, carbon monoxide, sodium and potassium. The findings bode well for the capability of Webb’s instruments to conduct the broad range of investigations of all types of exoplanets, including small, rocky worlds like those in the TRAPPIST-1 system.

While Webb and other space telescopes, including NASA's Hubble and Spitzer, previously have revealed isolated ingredients of this broiling planet’s atmosphere, the new readings from Webb provide a full menu of atoms, molecules, and even signs of active chemistry and clouds.

The latest data also give a hint of how these clouds might look up close: broken up rather than a single, uniform blanket over the planet.

The telescope’s array of highly sensitive instruments was trained on the atmosphere of WASP-39 b, a « hot Saturn » (a planet about as massive as Saturn but in an orbit tighter than Mercury) orbiting a star some 700 light-years away.

« We observed the exoplanet with multiple instruments that, together, provide a broad swath of the infrared spectrum and a panoply of chemical fingerprints inaccessible until [this mission], » said Natalie Batalha, an astronomer at the University of California, Santa Cruz, who contributed to and helped coordinate the new research. « Data like these are a game changer. »

The suite of discoveries is detailed in a set of five upcoming scientific papers. Among the unprecedented revelations is the first detection in an exoplanet atmosphere of sulfur dioxide (SO2), a molecule produced from chemical reactions triggered by high-energy light from the planet’s parent star. On Earth, the protective ozone layer in the upper atmosphere is created in a similar way.

« This is the first time we see concrete evidence of photochemistry – chemical reactions initiated by energetic stellar light – on exoplanets, » said Shang-Min Tsai, a researcher at the University of Oxford in the United Kingdom and lead author of the paper explaining the origin of sulfur dioxide in WASP-39 b’s atmosphere. « I see this as a really promising outlook for advancing our understanding of exoplanet atmospheres with [this mission]. » 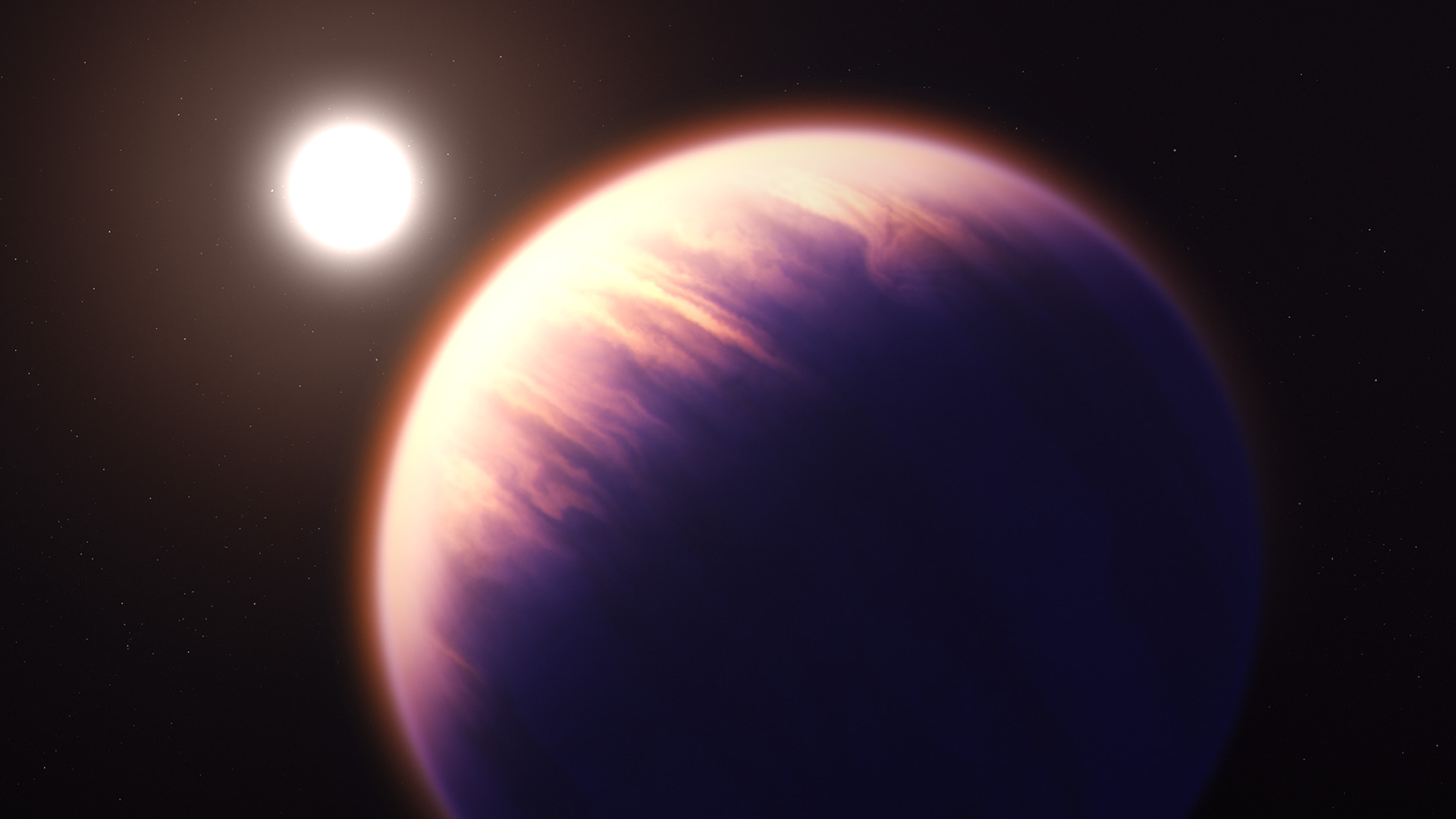 This led to another first : scientists applying computer models of photochemistry to data that requires such physics to be fully explained. The resulting improvements in modeling will help build the technological know-how to interpret potential signs of habitability in the future.

« Planets are sculpted and transformed by orbiting within the radiation bath of the host star, » Batalha said. « On Earth, those transformations allow life to thrive. »

The planet’s proximity to its host star – eight times closer than Mercury is to our Sun – also makes it a laboratory for studying the effects of radiation from host stars on exoplanets. Better knowledge of the star-planet connection should bring a deeper understanding of how these processes affect the diversity of planets observed in the galaxy.

To see light from WASP-39 b, Webb tracked the planet as it passed in front of its star, allowing some of the star’s light to filter through the planet’s atmosphere. Different types of chemicals in the atmosphere absorb different colors of the starlight spectrum, so the colors that are missing tell astronomers which molecules are present. By viewing the universe in infrared light, Webb can pick up chemical fingerprints that can’t be detected in visible light.

Other atmospheric constituents detected by the Webb telescope include sodium (Na), potassium (K), and water vapor (H2O), confirming previous space- and ground-based telescopeobservations as well as finding additional fingerprints of water, at these longer wavelengths, that haven’t been seen before.

Webb also saw carbon dioxide (CO2) at higher resolution, providing twice as much data as reported from its previous observations. Meanwhile, carbon monoxide (CO) was detected, but obvious signatures of both methane (CH4) and hydrogen sulfide (H2S) were absent from the Webb data. If present, these molecules occur at very low levels.

To capture this broad spectrum of WASP-39 b’s atmosphere, an international team numbering in the hundreds independently analyzed data from four of the Webb telescope’s finely calibrated instrument modes.

« We had predicted what [the telescope] would show us, but it was more precise, more diverse, and more beautiful than I actually believed it would be, » said Hannah Wakeford, an astrophysicist at the University of Bristol in the United Kingdom who investigates exoplanet atmospheres.

Having such a complete roster of chemical ingredients in an exoplanet atmosphere also gives scientists a glimpse of the abundance of different elements in relation to each other, such as carbon-to-oxygen or potassium-to-oxygen ratios. That, in turn, provides insight into how this planet – and perhaps others – formed out of the disk of gas and dust surrounding the parent star in its younger years.

WASP-39 b’s chemical inventory suggests a history of smashups and mergers of smaller bodies called planetesimals to create an eventual goliath of a planet. 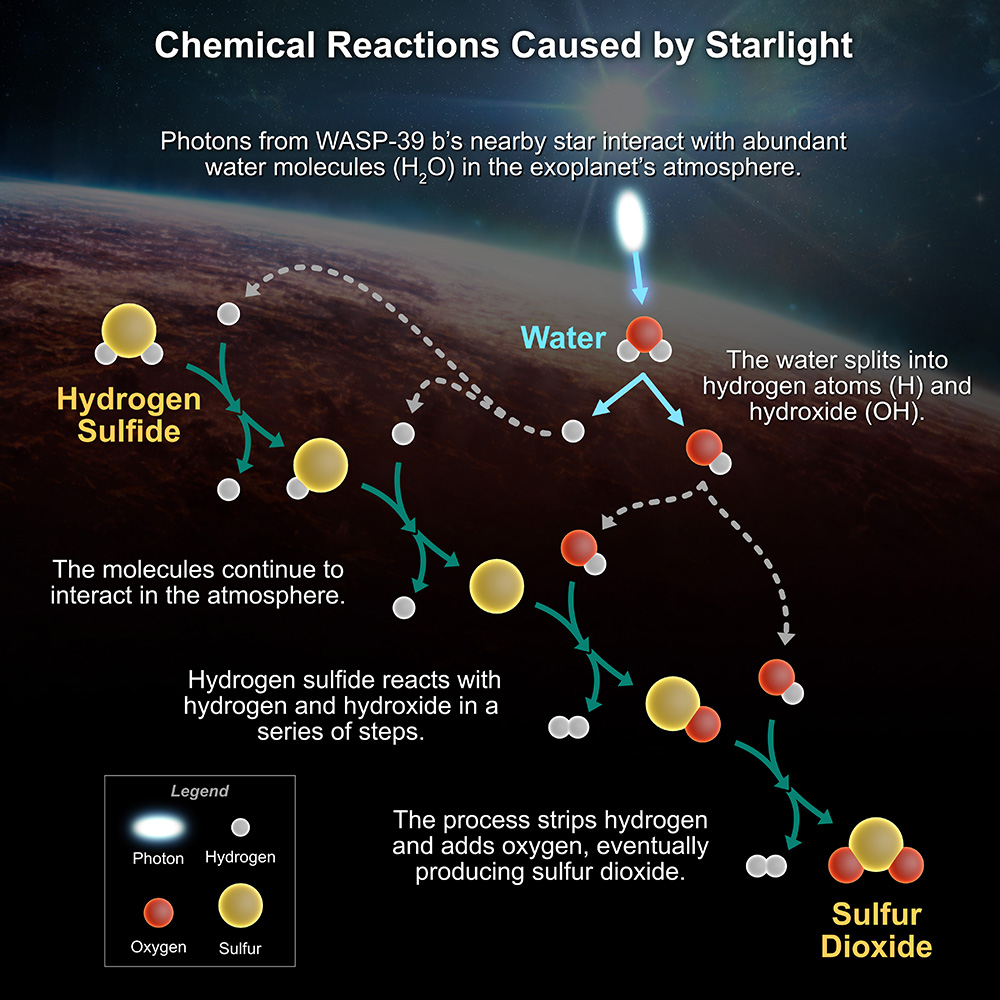 « The abundance of sulfur [relative to] hydrogen indicated that the planet presumably experienced significant accretion of planetesimals that can deliver [these ingredients] to the atmosphere, » said Kazumasa Ohno, a UC Santa Cruz exoplanet researcher who worked on Webb data. « The data also indicates that the oxygen is a lot more abundant than the carbon in the atmosphere. This potentially indicates that WASP-39 b originally formed far away from the central star. »

« By detecting sulfur dioxide, we have access to sulfur atoms for the first time in an exoplanet atmosphere.Together with the detection of carbon dioxide and water giving us access to oxygen and carbon atoms, this provides a much more holistic view of what the building blocks of this planet might have been, » explained Vivien Parmentier, Junior Professor Chair Université Côte d’Azur.

In so precisely parsing an exoplanet atmosphere, the Webb telescope’s instruments performed well beyond scientists’ expectations – and promise a new phase of exploration among the broad variety of exoplanets in the galaxy.

« We are going to be able to see the big picture of exoplanet atmospheres, » said Laura Flagg, a researcher at Cornell University and a member of the international team. « It is incredibly exciting to know that everything is going to be rewritten. That is one of the best parts of being a scientist. »

The James Webb Space Telescope is the world's premier space science observatory. Webb will solve mysteries in our solar system, look beyond to distant worlds around other stars, and probe the mysterious structures and origins of our universe and our place in it. Webb is an international program led by NASA with its partners, European Space Agency (ESA) and Canadian Space Agency (CSA).

On the preprint server